Parama Pujya Sri Swamiji has completed the long-awaited journey to Antarctica. His Holiness stepped off the cruise ship onto the Antarctic Peninsula and surrounding islands five times during the voyage.

The voyage began from Ushuaia, Argentina (considered the ‘southern tip of the world’) on the evening of December 29, 2013. While traveling, Sri Swamiji explored the ship, visiting both the bow and the stern, and even taking the steering wheel at the helm for a few moments. He blessed lucky devotees and other passengers of the ship by playing the Piano in one of the ship’s observatories for about twenty minutes. After two days cruising through the crashing, six meter waves of the Drake Passage, the first Antarctica land sightings occurred on the afternoon of December 31.

At midnight on New Year’s Eve, Sri Swamiji came out to bless the devotees, a special surprise for those gathered there. Gurudeva tied a Raksha for every devotee, gave Pada Sparshana, and distributed sweets to the group. Sri Swamiji fondly remembered and missed the thousands of devotees who would have gathered in India to see Him on New Year’s day.

During the first landing on January 1, Sri Swamiji sat on a snowbank near the cobblestone beaches of Enterprise Island while lovingly watching a large colony of Gentoo Penguins returning from their long days at sea. The Gentoos awkwardly jumped out from the water and waddled up into the ‘Penguin highways’ of the snow towards their nesting grounds. Three types of Penguins were spotted during the expedition: Gentoo, Adeile, and Chinstrap. After about half an hour, Sri Swamiji began to rapidly cup the snow to His left with His hands, forming a small white Shiva Lingam. In the center of the Snow Lingam, He placed a green marble Lingam, and proceeded to perform the first Shiva Puja of the trip. Afterwards, as Sri Swamiji left Enterprise Island in a small zodiac boat towards the cruise ship, thick and majestic snowflakes began to fall - a rare occurrence in the Antarctic tundra’s summer.

On the morning of January 2, Sri Swamiji visited Port Lockroy, the southernmost point reached by the cruise (64o49’S,63o30’W). Sri Swamiji walked through a small house (converted to a museum) that British soldiers had previously lived in, seeing the minimal amenities and extreme weather conditions that greeted them every day. There was a post office here, and Sri Swamiji visited the gift shop as well.

On the morning of January 3, Sri Swamiji visited Danco Island. With His walking pole, yellow jacket, and characteristic sage colored hat, Sri Swamiji posed in front of a mountain resembling Mount Kailash. That afternoon, Sri Swamiji performed a second Shiva Puja at Orne Harbour, the first landing on the continent. The Puja was performed on a snowy slope in front of a rock structure which looked like a Indian stone temple facade. Devotees viewed this wonderful event from a short distance away. While devotees chanted “Om Namah Shivaya” and Datta Stavam, Sri Swamiji’s Parivar chanted Rudra Prashna Mantra.

The third Shiva Puja was performed on the morning of January 4 at Petermann Island. Sri Swamiji fondly named the island ‘Climax Island,’ as it was the last landing for the trip. Sri Swamiji happily hiked up a mountain slope on Climax Island, about a 40 minute walk in slippery snow from the landing point. Despite the somewhat precarious hike, Sri Swamiji walked slowly and carefully upwards. At one point, Sri Swamiji performed a Sashtanga Namaskara to Lord Shiva in the snow. Upon reaching a plateau at the top of the small mountain, Sri Swamiji sat in the snow and performed the third and final Shiva Puja. Devotees and Sri Swamiji meditated at the top of the hill for several minutes before turning around. While hiking down, a Gentoo penguin wandered away from the ‘Penguin highway’ and shyly followed Sri Swamiji.

Later that afternoon, several devotees and other passengers of the ship courageously participated in a Polar Plunge, diving off the cruise ship into the icy waters of the Southern Ocean. Sri Swamiji smilingly watched as devotees eagerly jumped in and hurriedly clambered out of the waters, refreshed and rejuvenated from the plunge.

That evening the cruise ship began the two day trip back through the Drake Passage. Upon landing in Ushuaia on 7th January morning, Sri Swamiji felt the ground with His hands.

Sri Swamiji visited the northern reaches of Arctic area in February 2013 and performed Ratha Saptami festival there. The same year, Sri Swamiji undertook the Southern polar Yatra to Antarctica this year and prayed for the well being of the planet and it’s inhabitants. The stark whiteness of Antarctica, the floating icebergs, their varied shapes, their blue hues, the spectacular white mountains, huge glaciers, was magical. 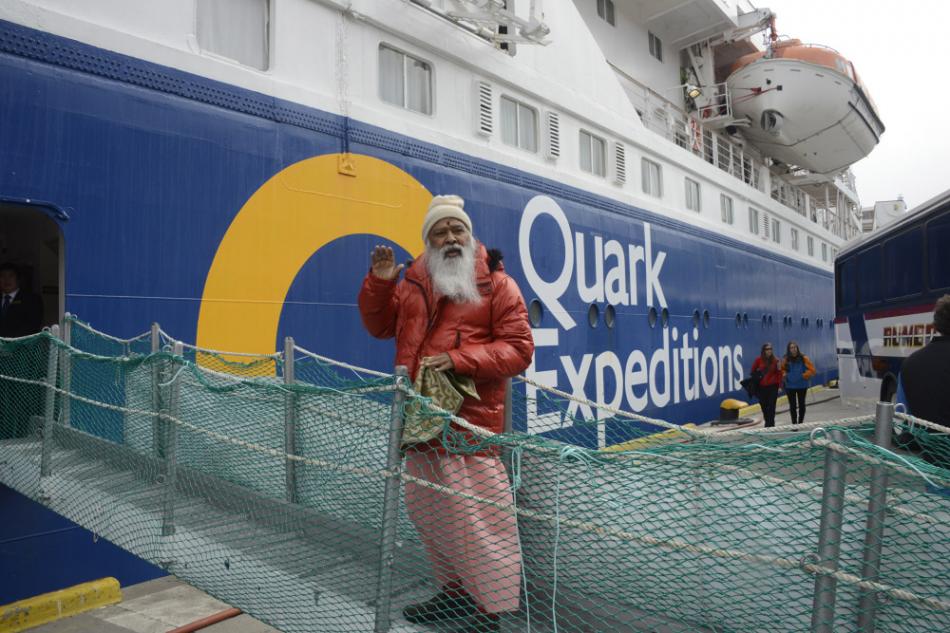 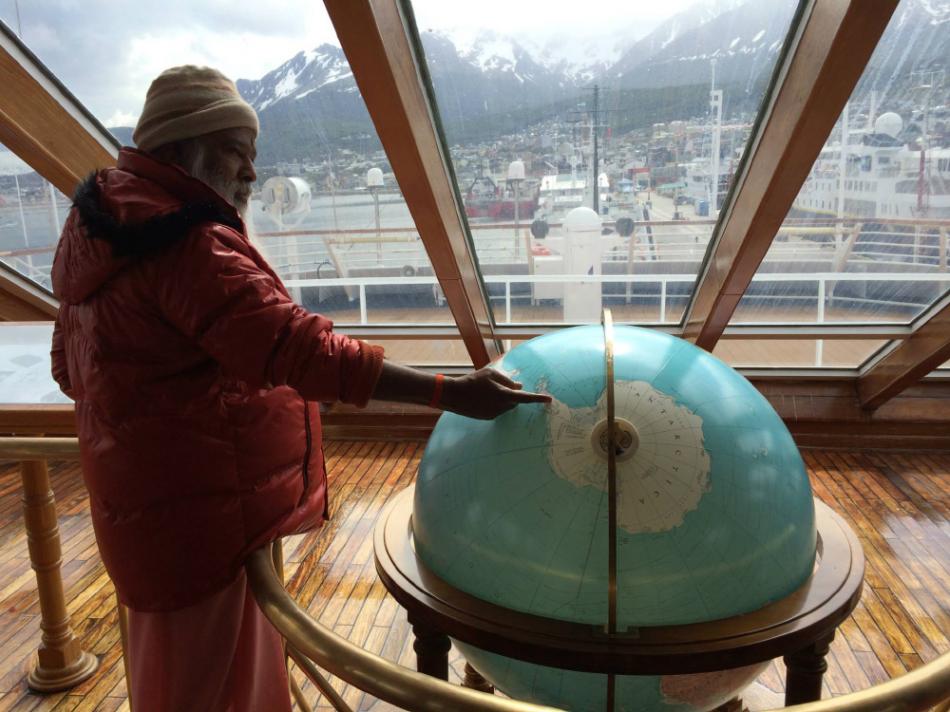 Sadgurudeva shows the peninsula region of Antarctica He will be visiting 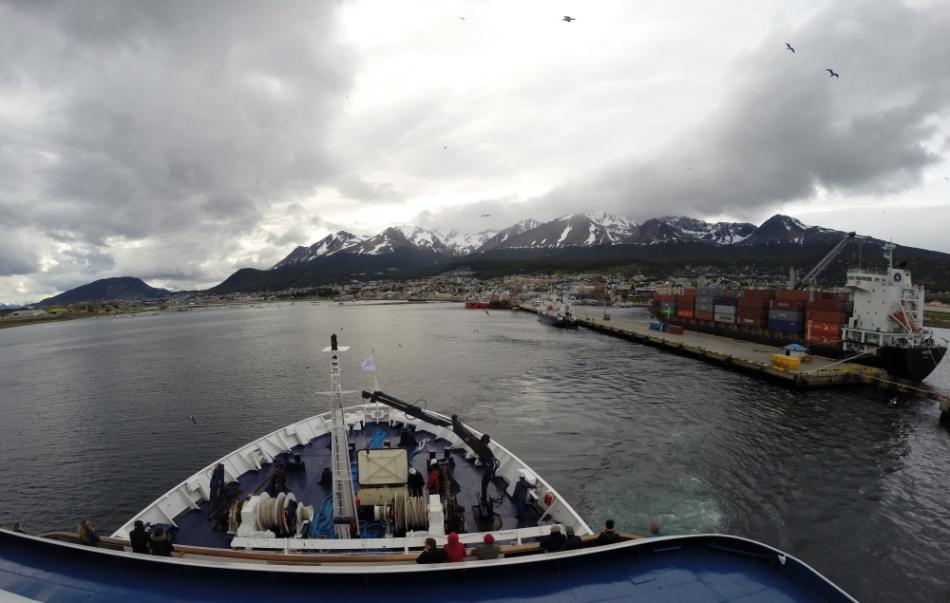 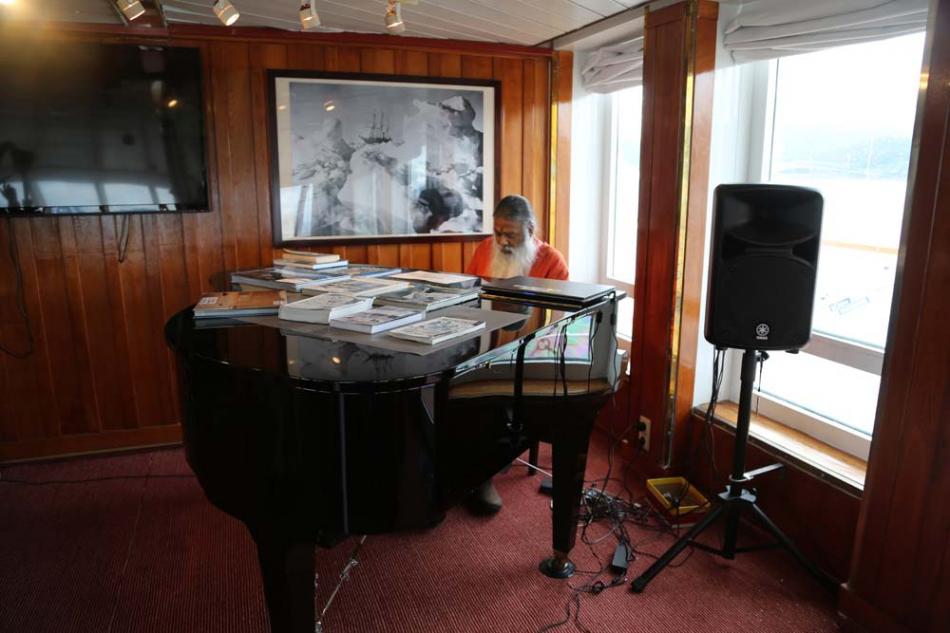 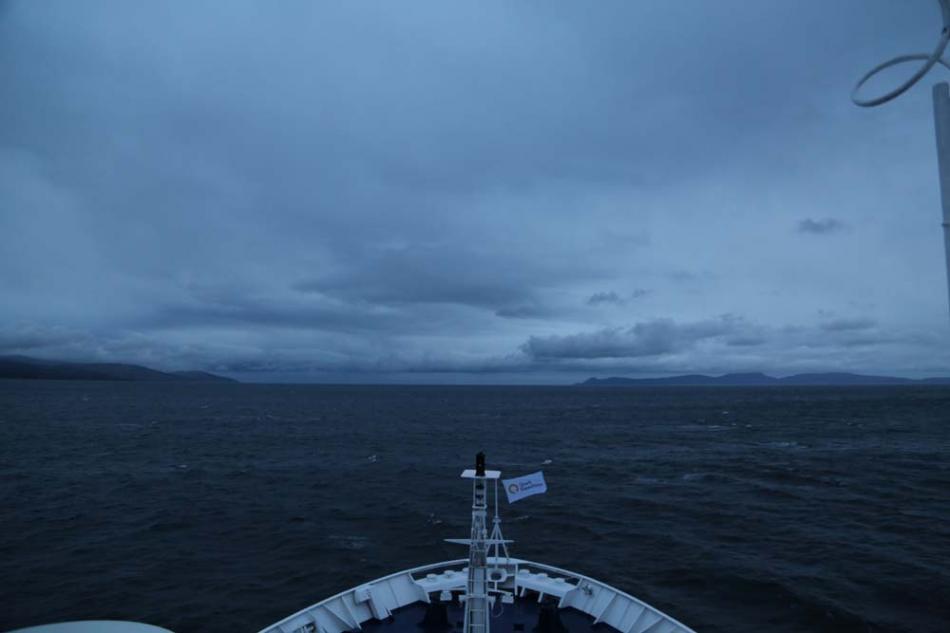 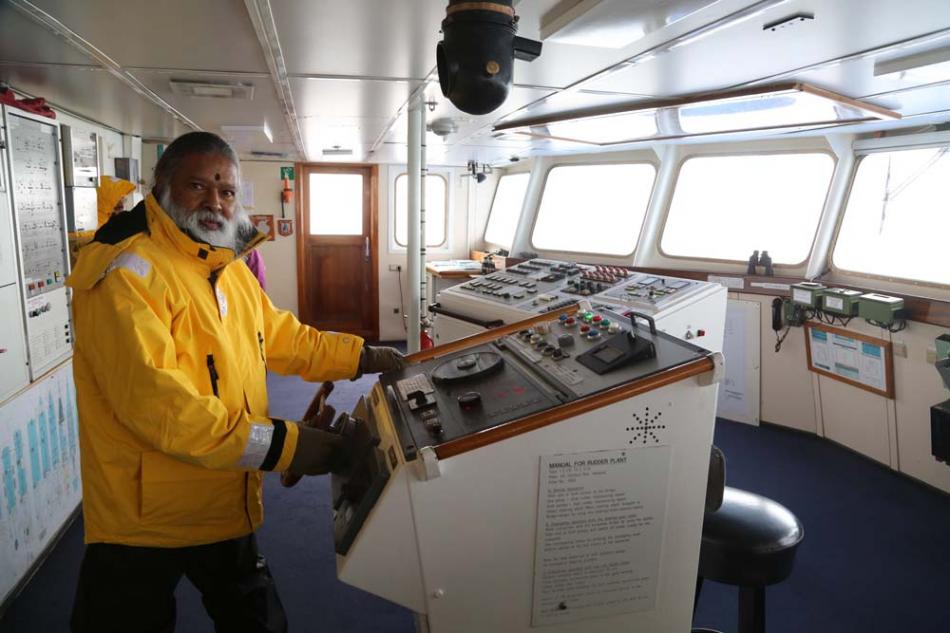 Gurudeva at controls on the ship bridge 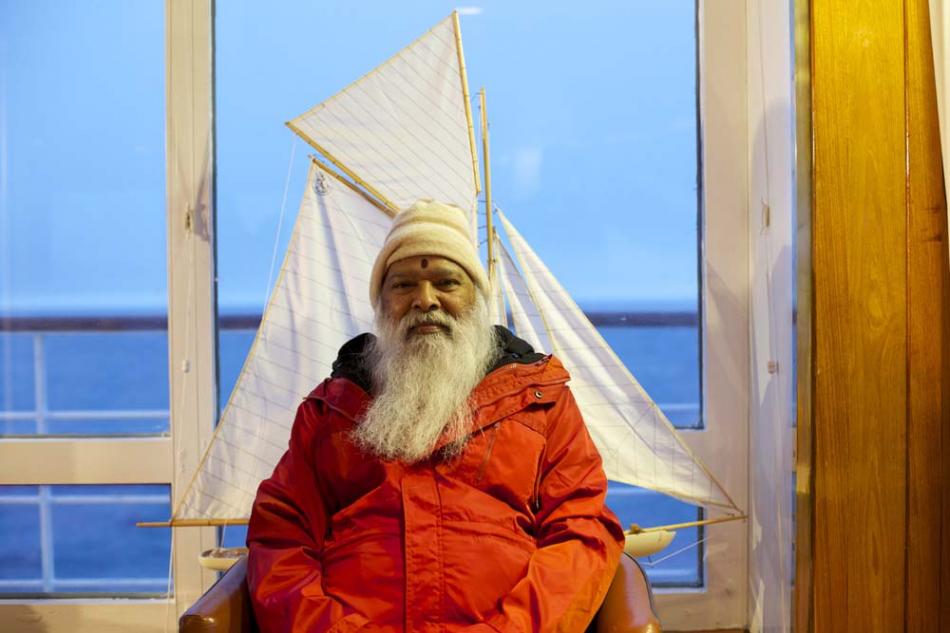 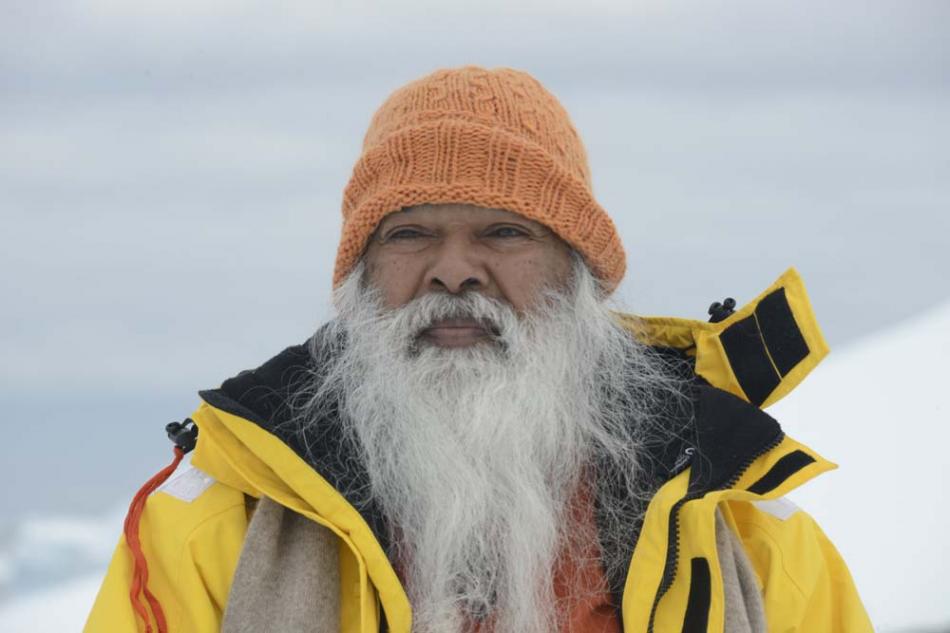 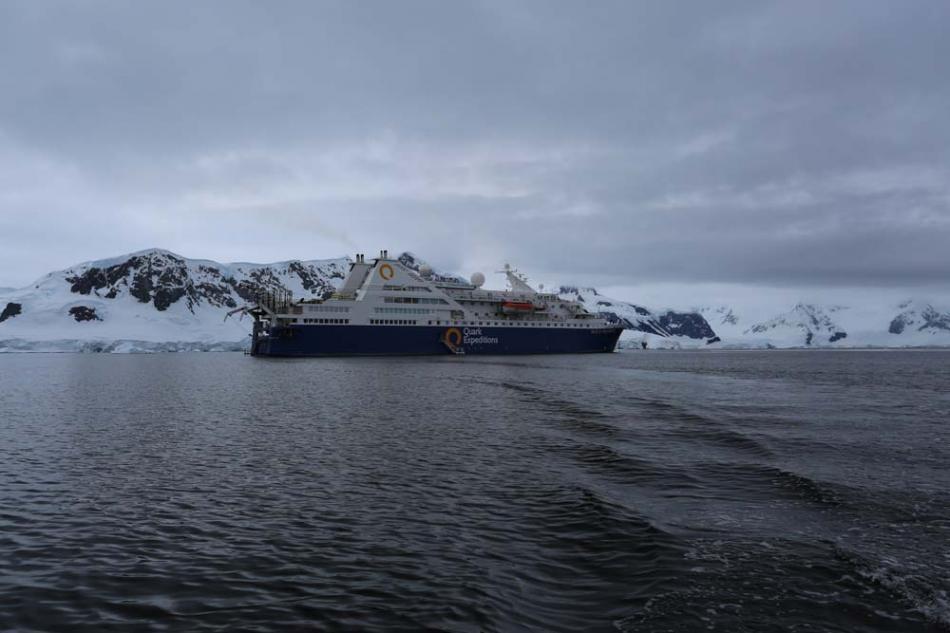 Quark Expeditions' Ocean Diamond was the ship that took Gurudeva to the seventh continent, Antarctica. 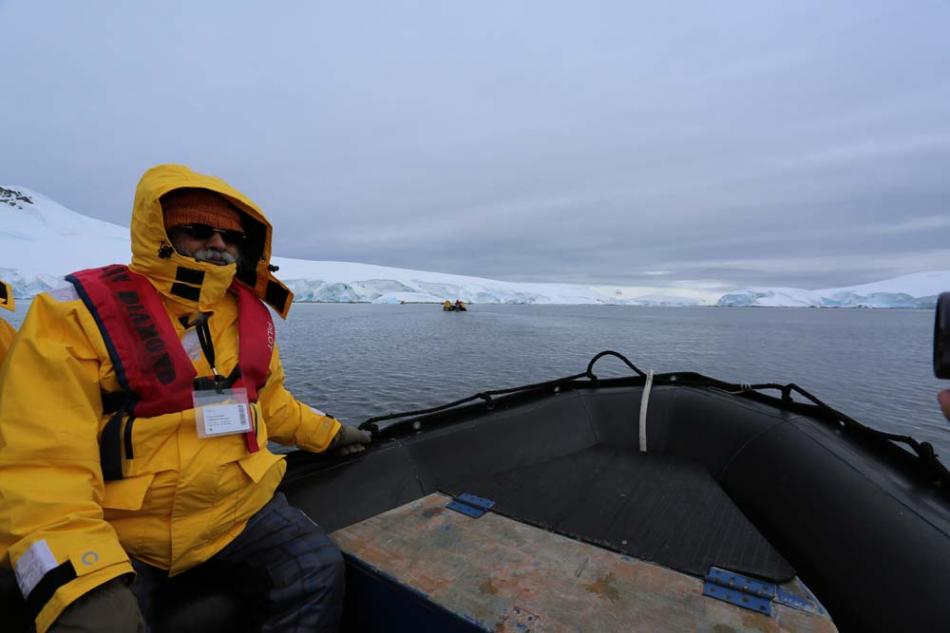 Sri Swamiji on Zodiac boat going around the icebergs of Antarctica 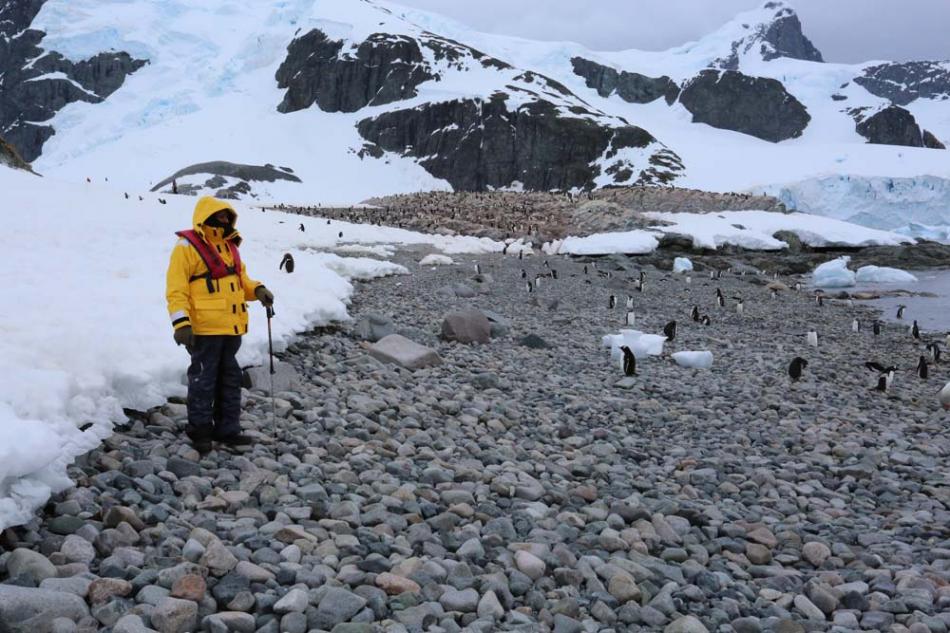 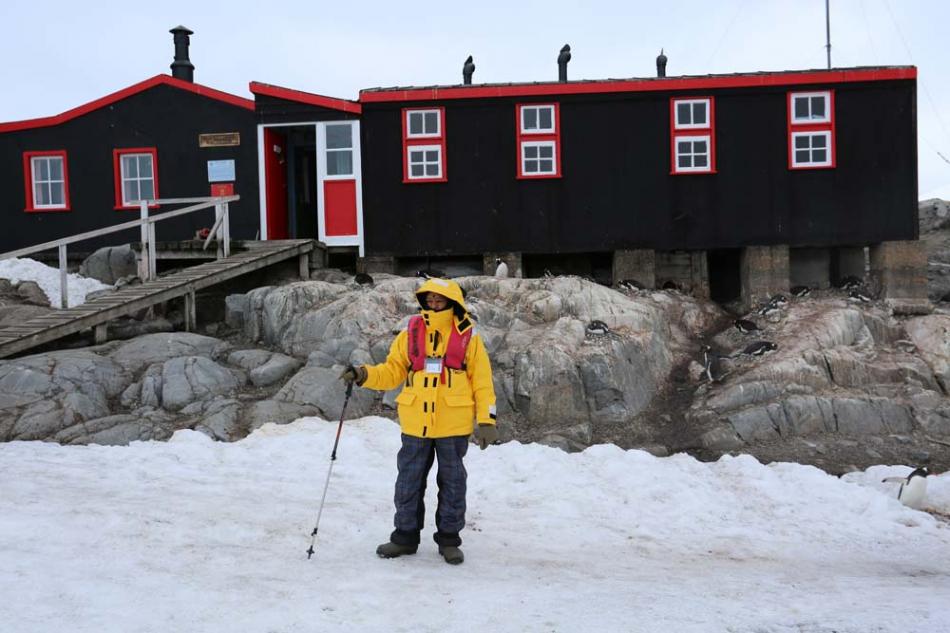 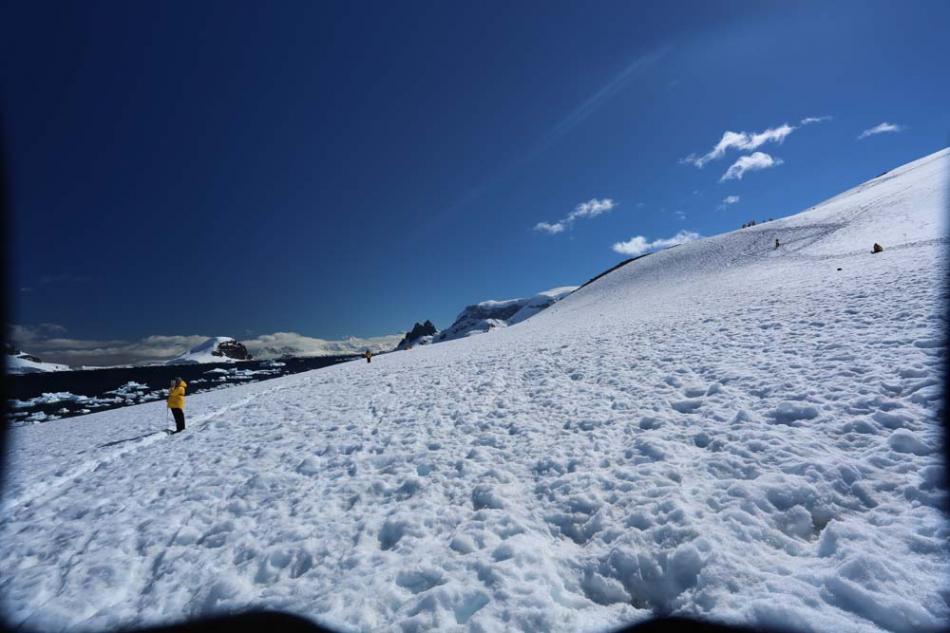 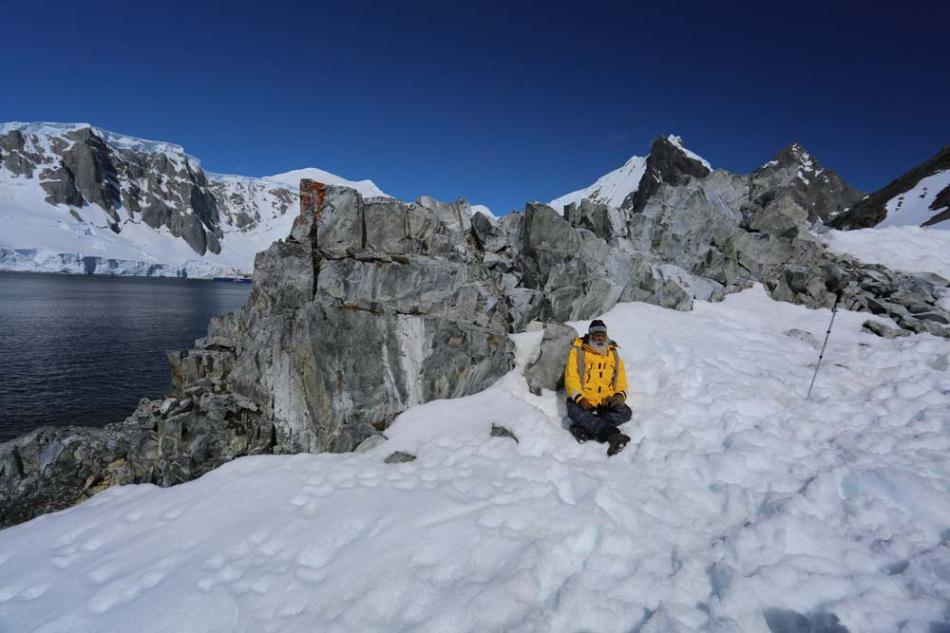 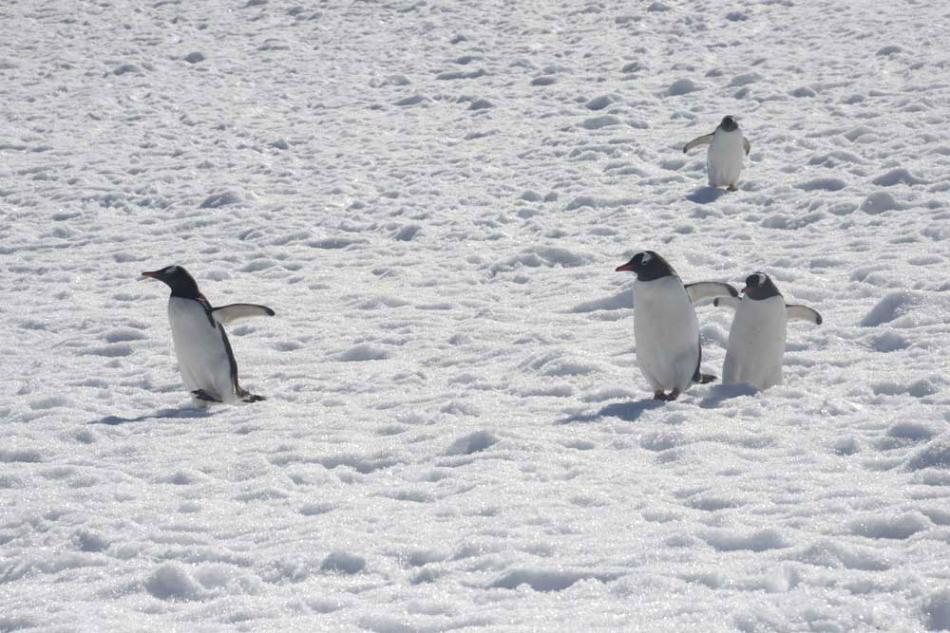 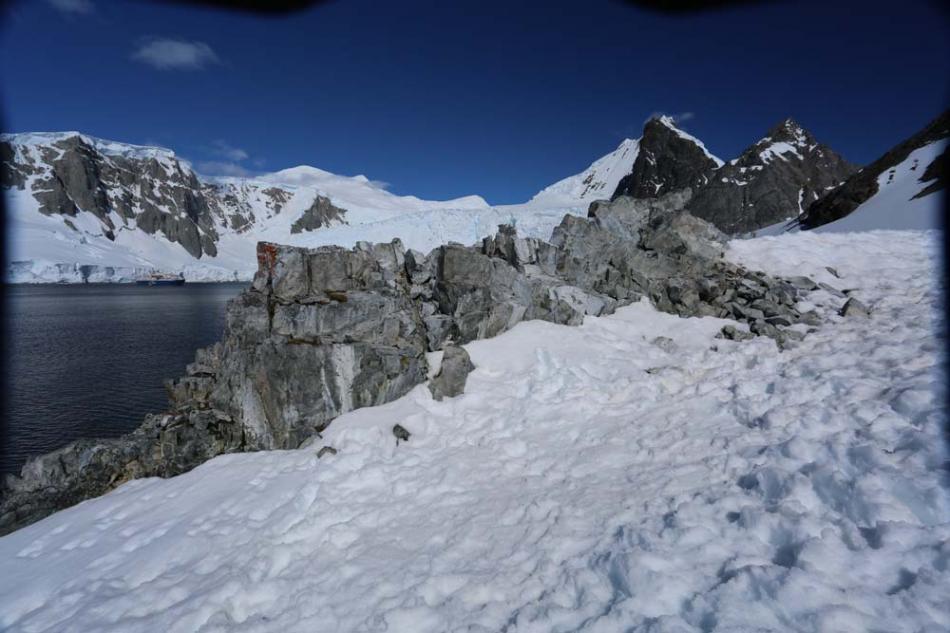 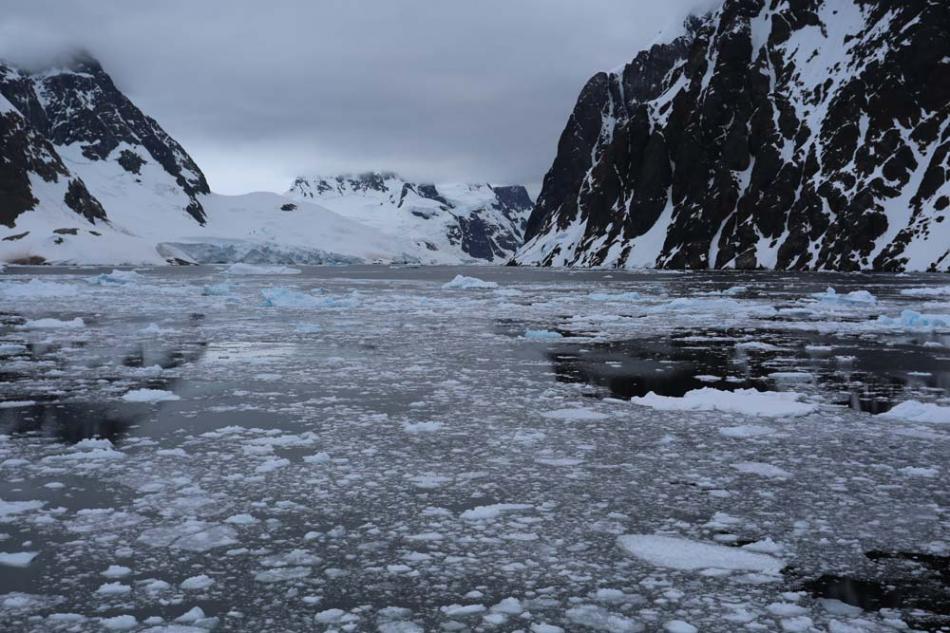 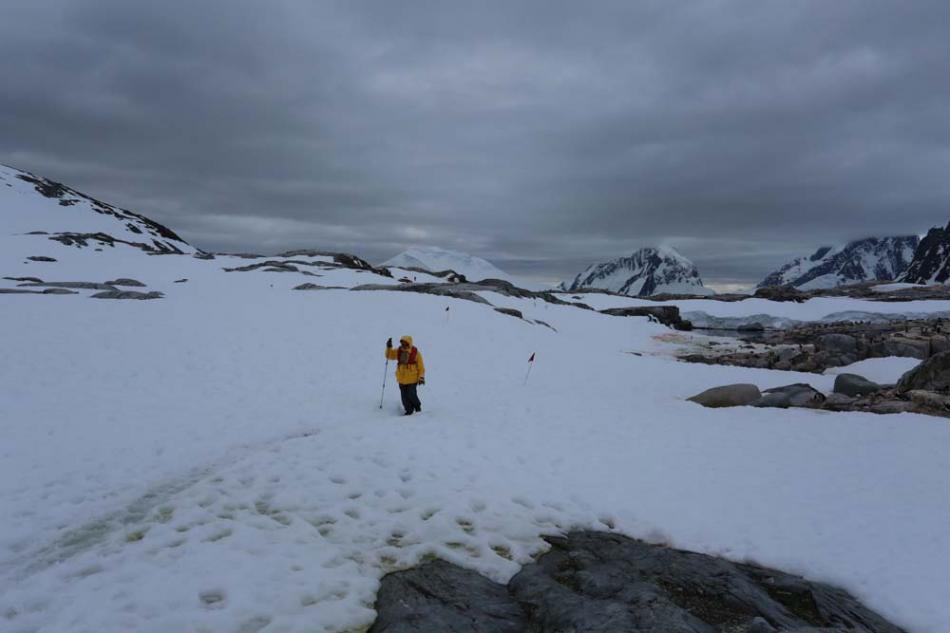 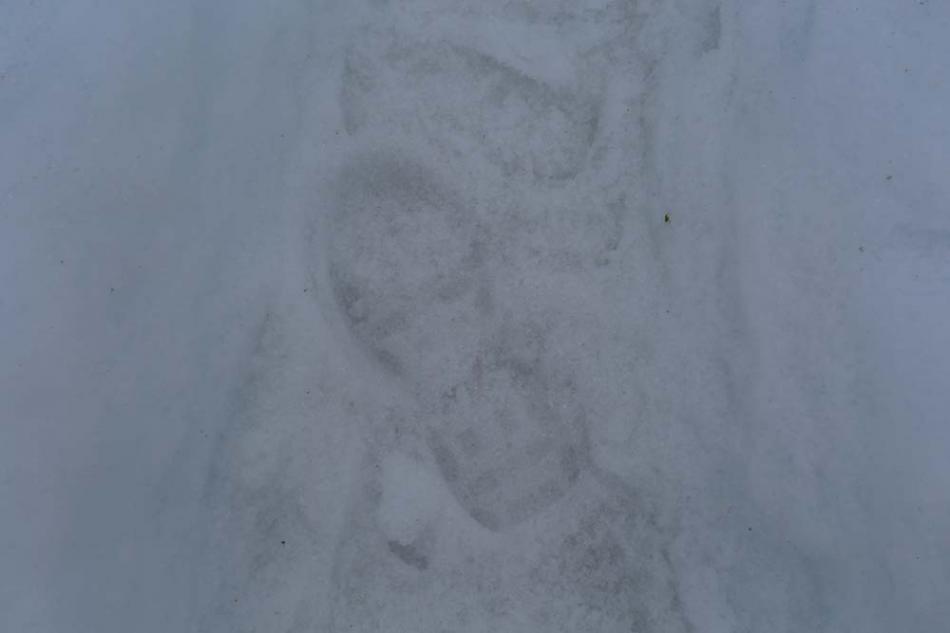 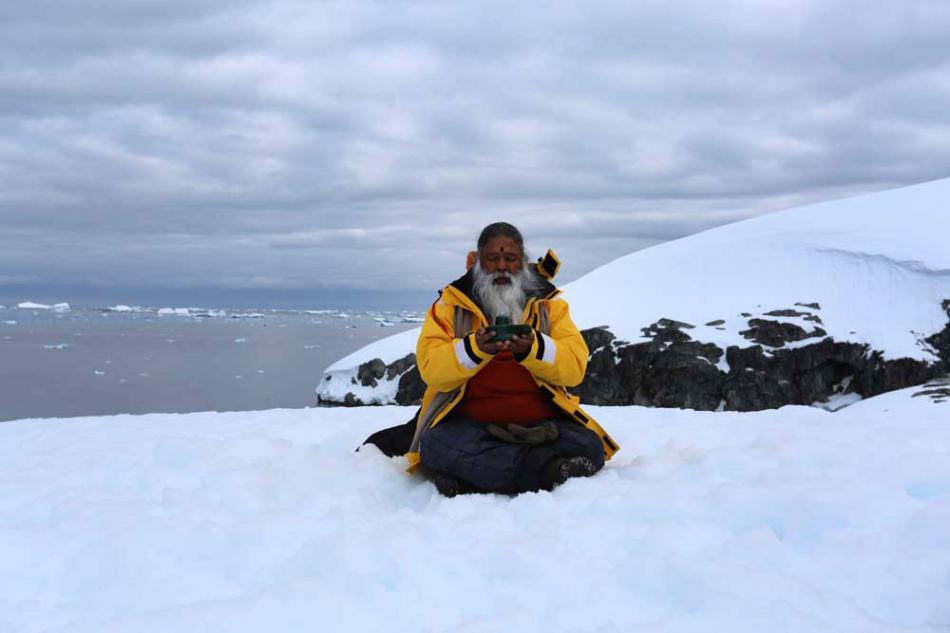 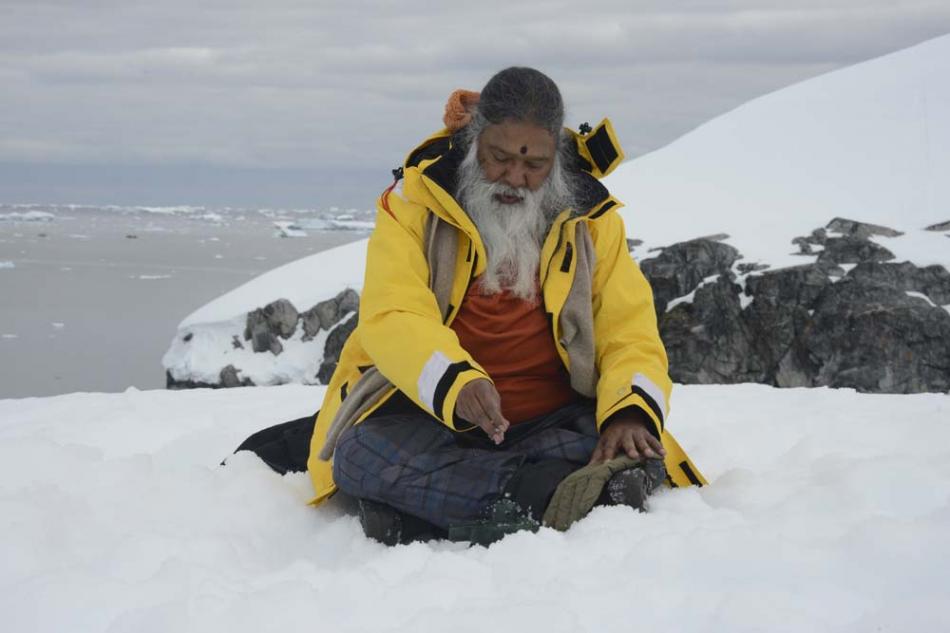 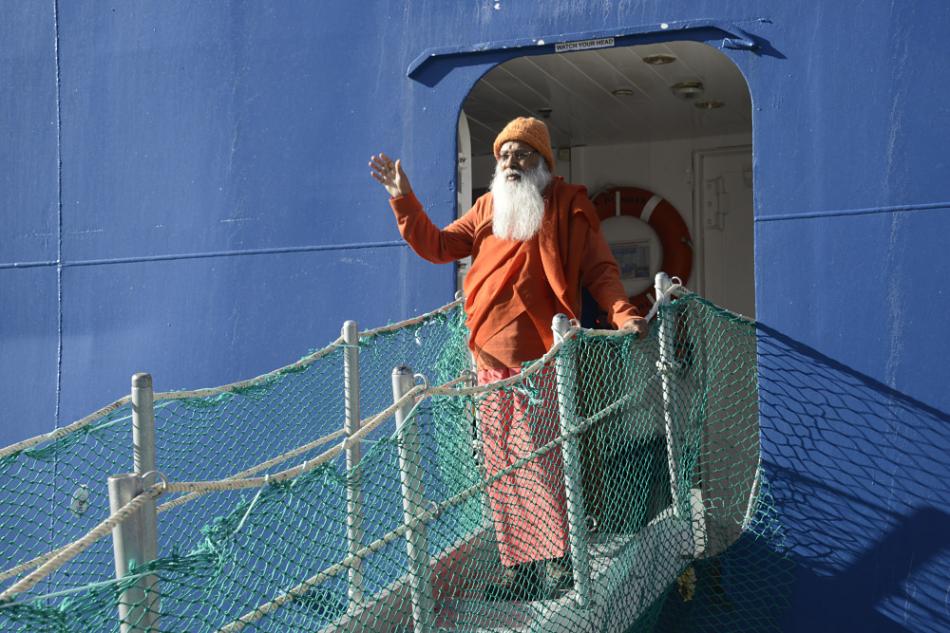 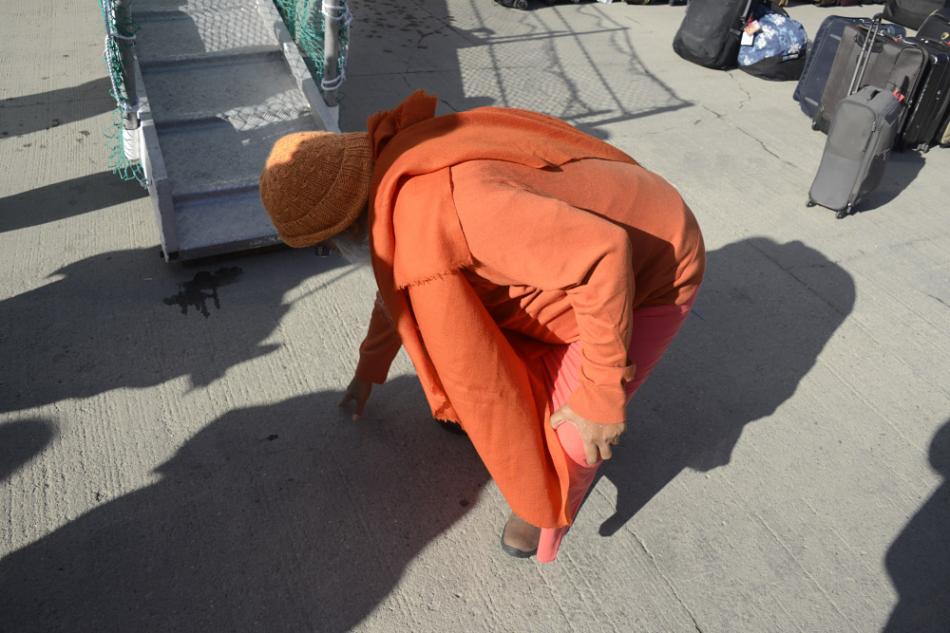