Pujya Sri Swamiji arrived in Frisco from New Jersey on the afternoon of July 10th, 2022. This was the second visit of His Holiness to Frisco this year. The first visit was in March 2022.
Sun, 10 July, 2022
Pujya Sri Swamiji, was welcomed into the new Guru Nilayam to a huge crowd of devotees, whom Sri Swamiji graciously invited inside and instructed to chant Datta Stavam and Hanuman Chalisa. Later that evening, Sri Swamiji was welcomed into the Karya Siddhi Hanuman Temple, followed by a procession of 80 ladies with kalashas (representing Pujya Sri Swamiji’s 80th birth year) and the reverberating sounds of drums, to begin a grand opening ceremony to the week’s festivities at the Karya Siddhi Hanuman Temple in Frisco, TX.
He offered arati to Lord Hanuman and visited all of the shrines.
Temple trustees offered a garland to Sri Swamiji, and Sri Swamiji blessed the new temple priests; Priest Manjunath and Priest Abhiram.
Nritya Seva was offered by the students of Natyanjali Kuchipudi Dance School, Utkala Dance Academy, Ellora Center of Performing Arts, Kuchipudi Kalakshetra, and Shrutilaya School of Dance under the artistic direction of Smt. Srilatha Suri, Smt. Krishnaveni Putrevu, Smt. Vani Iswara, Smt. Padma Sonti, and Smt. Madhushri, respectively. The literature for the song was composed by Sri. Ravindra Boggaram and sung by ***. Anjali Prabhala. Sri. Srinivas Prabhala was on keyboard and led the music orchestration; mrdangam was played by Sri. Shankar Rajagopalan; veena was rendered by Smt. Uma Prabhala, flute was played by Sri. Gautam Prasad, and Sri. Shashank Iswara was on rhythm pads, making this a completely Dallas-based production. The piece, dedicated to Sri Swamiji, PUJYA SWAMIJI’s 80th birthday, and the deities of Karya Siddhi Hanuman temple, was set to tune by Vid. Seshulatha Kosuri from Hyderabad.
Dr. Prakash Rao offered the introduction speech and spoke on Guru Tattva and the glory of Guru.
Bhagavad Gita teachers offered a Gita book in 3 volumes for Sri Swamiji to release. It contains detailed commentary on Bhagavad Gita by Pujya Sri Swamiji.
Sri. Satyam Upadrashta explained the power of this book. It contains simple, everyday lessons, and solutions to your problems. It was sponsored by the Gita team, and an English version will be released soon. A new Gita meaning book in Telugu was also offered for release. Gita teachers also offered an MP3 volume of Sri Swamiji’s Gita discourses from each morning on ETV, containing all audios from the 1980s to the present. Janani Raman spoke on Bhajan Babies, which is a free YouTube channel that promotes Sri Swamiji’s bhajans through videos for young children. It has experienced incredible success and all devotees can subscribe to the channel. The Bhajan Babies team released a Hanuman puzzle, Guru Purnima T-shirts, magnets, bags, and stickers. A Hari Vamsam book was also released in Telugu, containing Sri Swamiji discourses given during the pandemic. Sirish Poondla came forward to release t-shirts designed around 80th birthday celebrations, Sri Jayalakshmi Mata’s birth centenary year, and Karya Siddhi Hanuman Temple t-shirts in various colors. A book was also released on yoga. Yogini Kali Ji, who conducted yoga sessions for devotees each morning during the celebrations, offered an MP3 format of the album “Bhajans on Piano” by Sri. Brian Silas for release. Sri. Jayaraman from the Chennai Ashram came to release an MP3 format of “Keerthana Chandrika.” It contains 80 bhajans, with music by Sri. Sundar C. Babu, and was recorded within one week, in one take. It is also available on iTunes and Google Play. Sri. Satyam Upadrashta came forward to offer Script for Success, a book handwritten by Sri Swamiji containing 1008 quotes to aide and inspire devotees. Sri Swamiji then blessed devotees with a discourse. He instructed devotees to continue to take precautions against Covid, and to face and welcome karma, rather than resisting. He urged devotees to train the senses and pray to Lord Hanuman for strength to face karma. Sri Swamiji spoke on the Dvisahasragala event in August and encouraged devotees to attend, register for programs, and follow instructions. He also instructed that every child should have a copy of Script for Success. Containing social, scientific, and scriptural examples, open the book at any page, and you will get an indirect answer to your problem. Sri Swamiji called it the “modern Gita”.
To watch the Facebook video of evening program of 10th July 2022, click : https://fb.watch/fu_0hiU-lB/
Monday, 11 July, 2022
Sri Swamiji performed Sri Chakra Puja in the evening, while the DYC Dallas Satsang group sang bhajans. Yogini Kaliji offered a garland to Sri Swamiji. ***. Daksha, from Proddatur, taking inspiration from Sri Swamiji’s life history, offered slokas in Sanskrit about her beloved Tataji, which were composed by her, with the help of her teacher Sri Dorbhala Prabhakara Sharma. Sri Swamiji then blessed devotees with a discourse. He urged devotees not to compare with each other, for we are all Guru siblings in Guru’s home. Sri Swamiji explained about the 3 bhavas, or feelings, Manasa, Vachasa, and Shirasa, and spoke on the importance of Sashtanga Namaskara.
Pujya Sri Swamiji in His discourse said:

On Monday, 18th July 2022 morning, Pujya Sri Swamiji travelled by road from Frisco to His maiden visit to Austin in Texas. 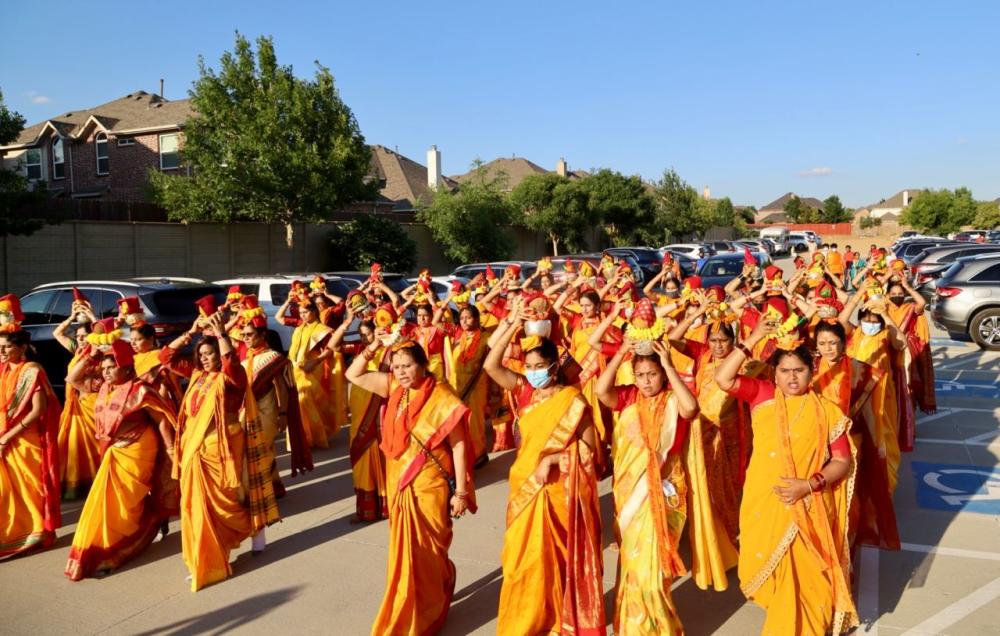 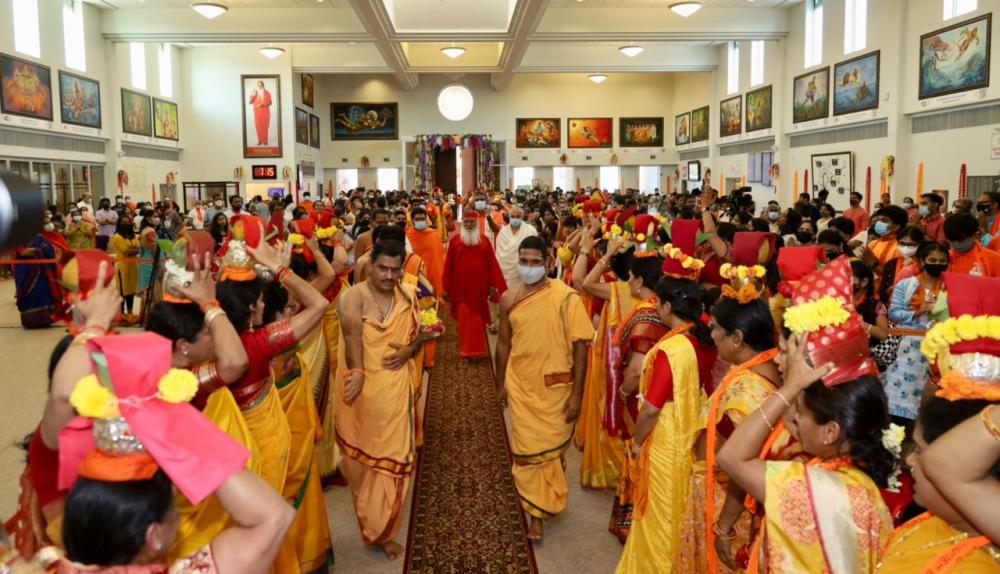 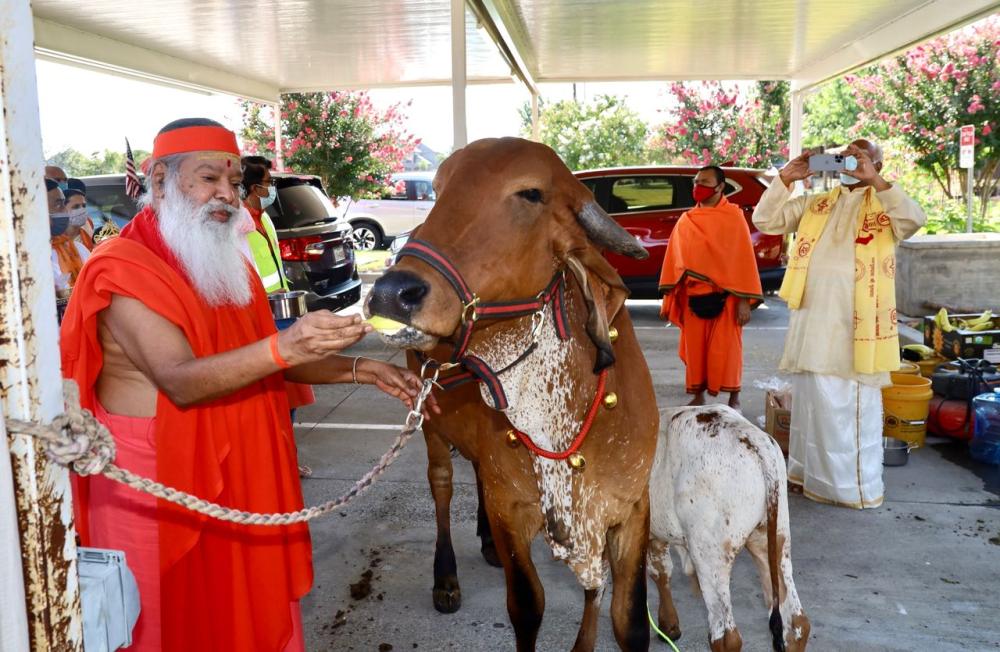 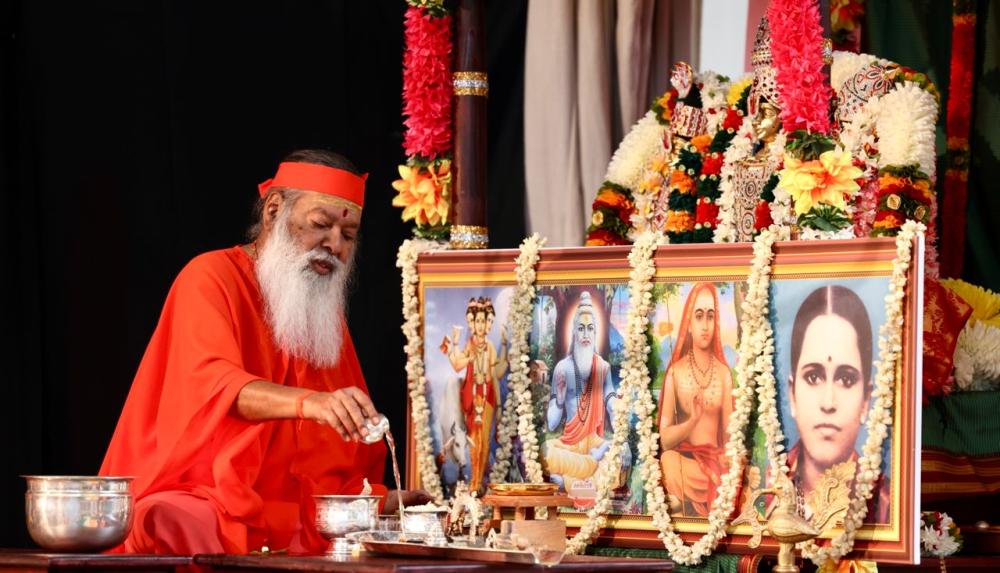 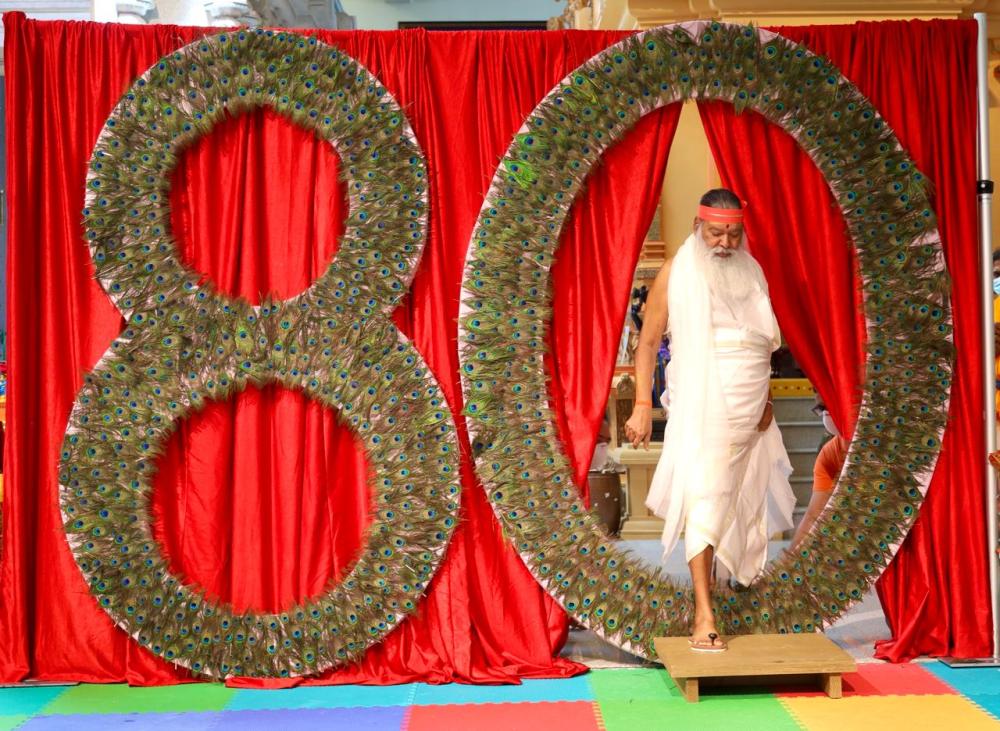 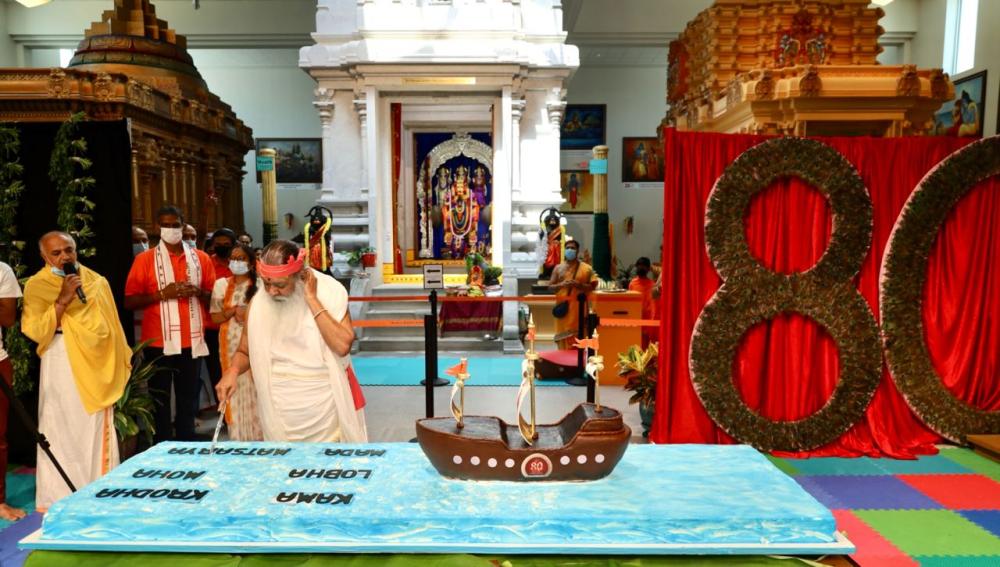 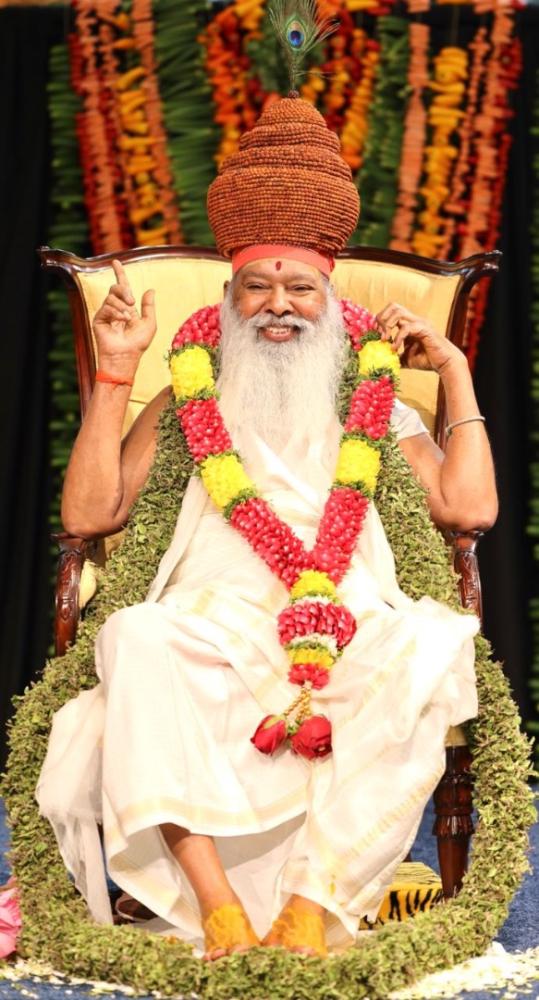 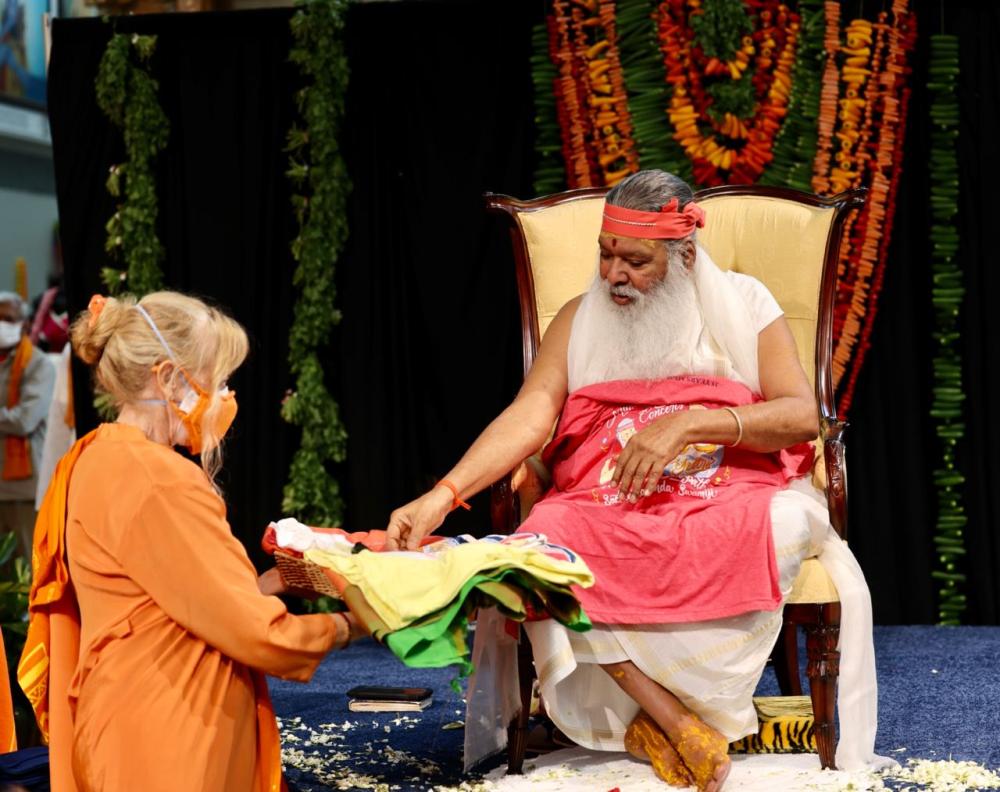 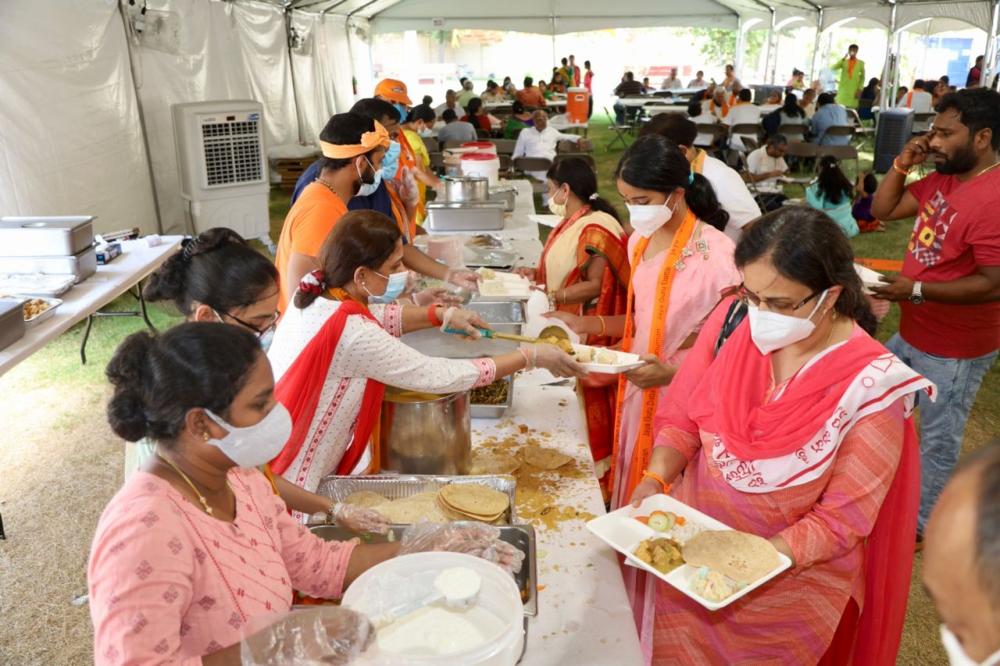 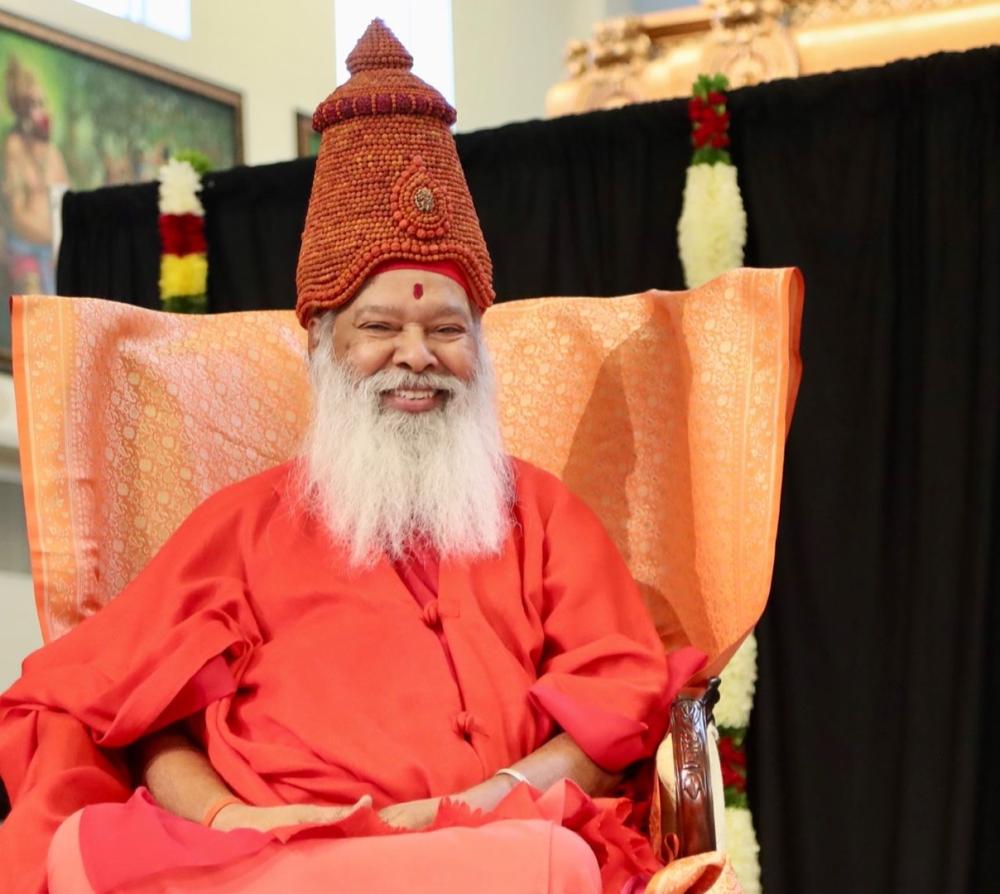 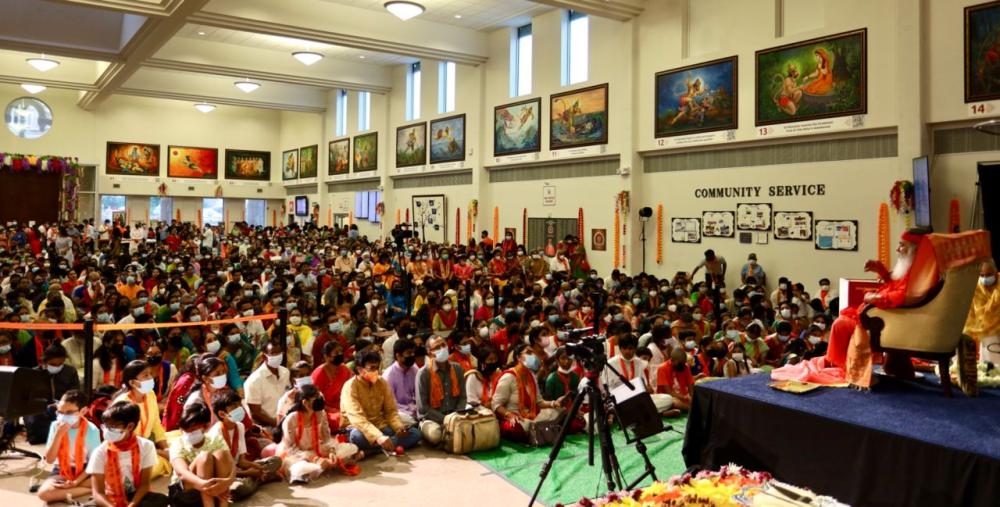 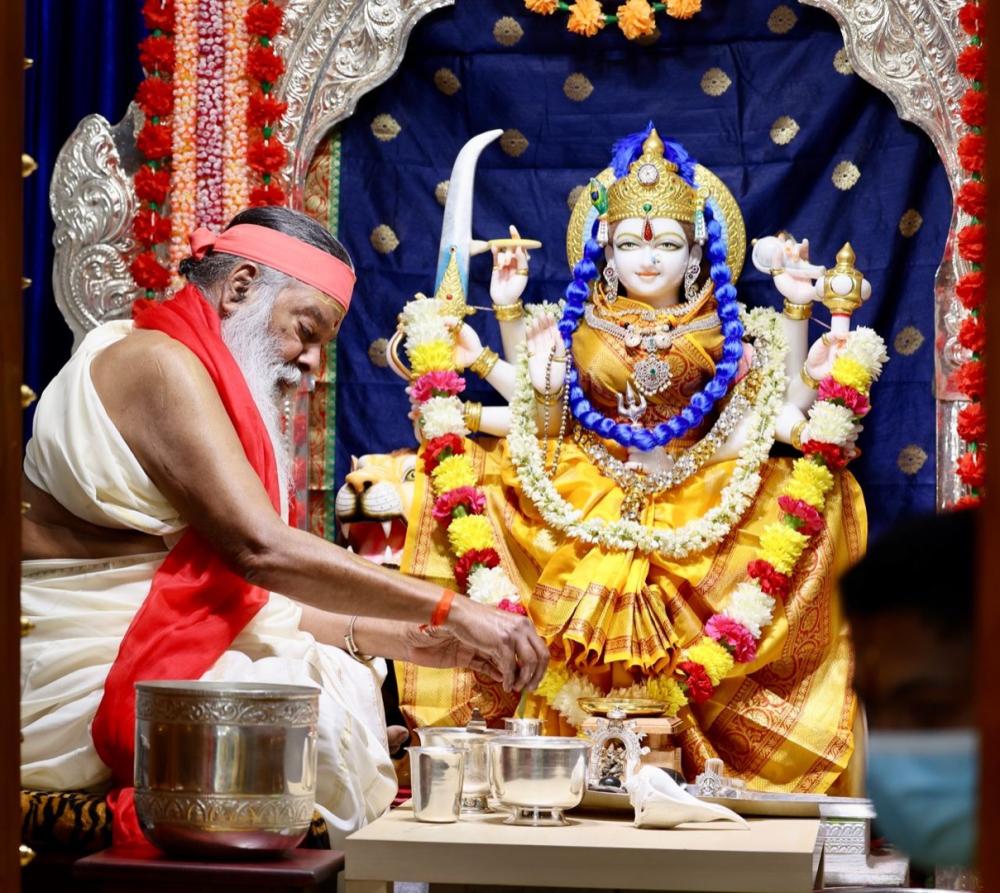 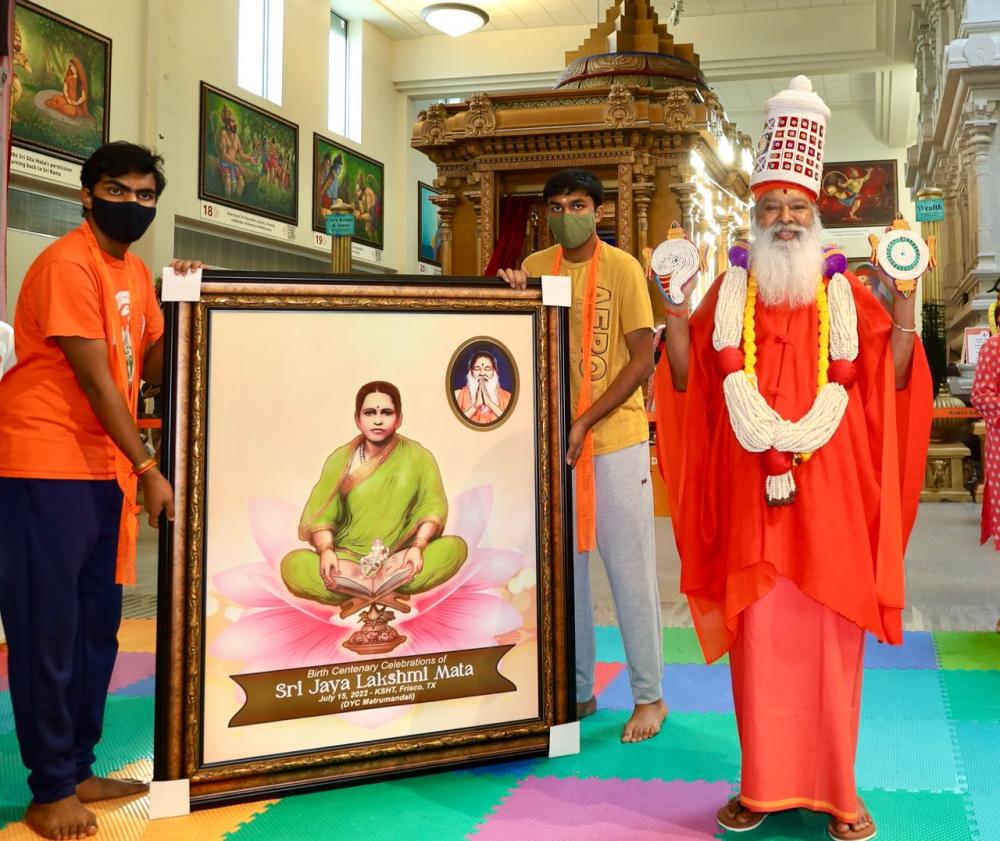 New board members of Datta Yoga Center offered their respects to Pujya Swamiji on 15th July 2022 at KSHT, Frisco, TX 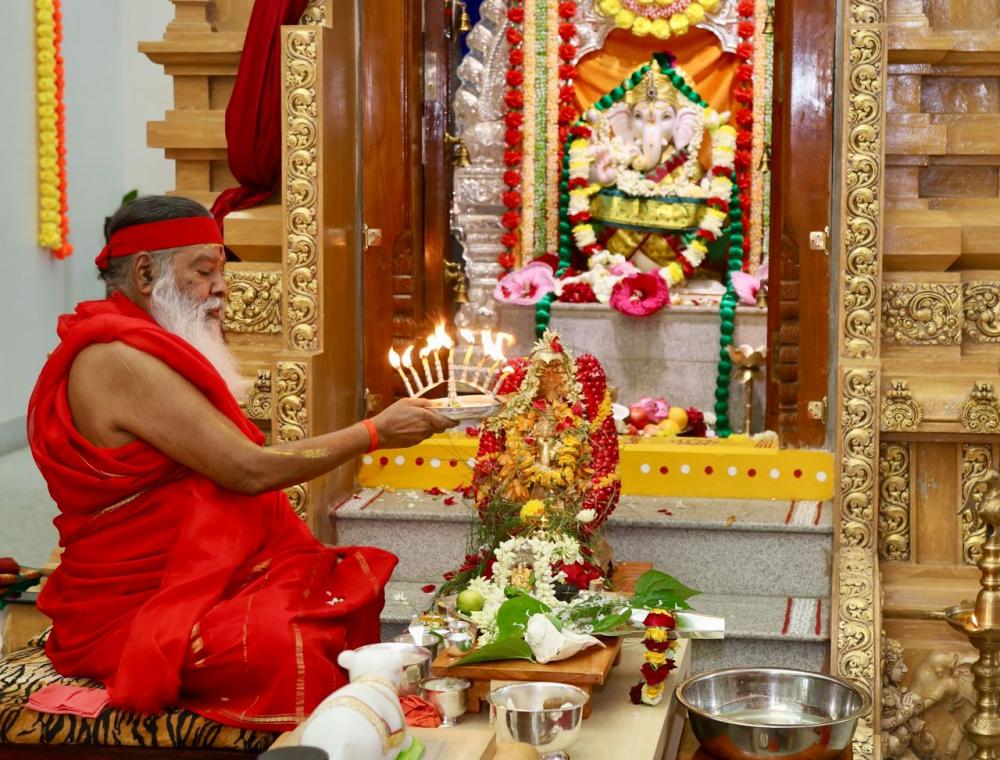 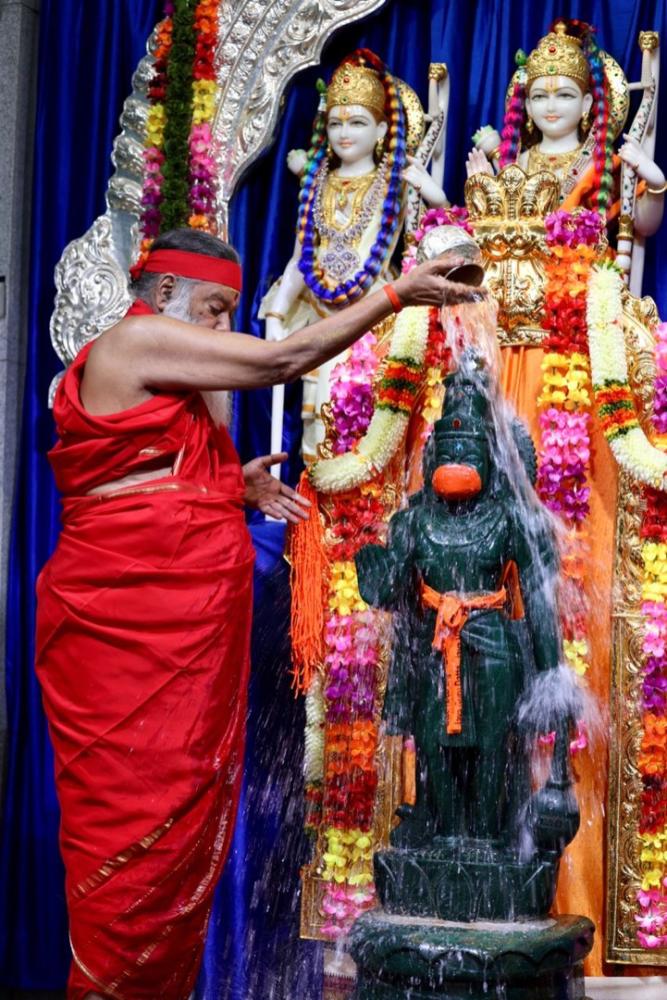 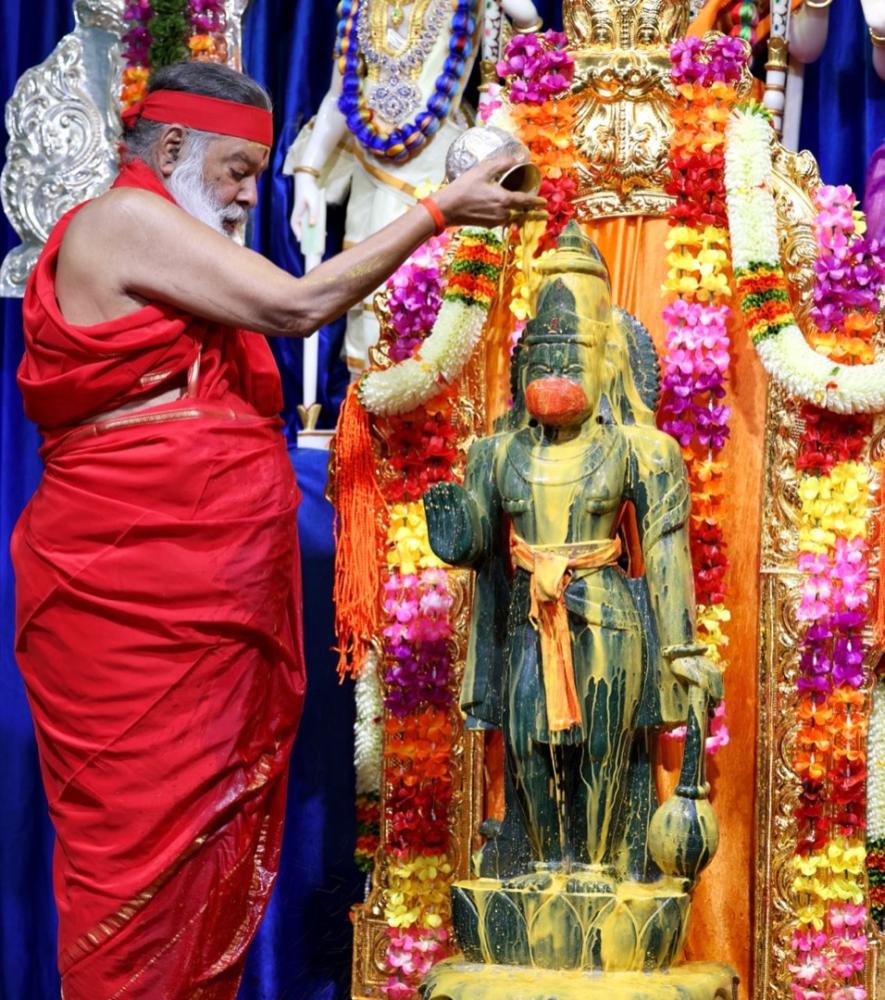 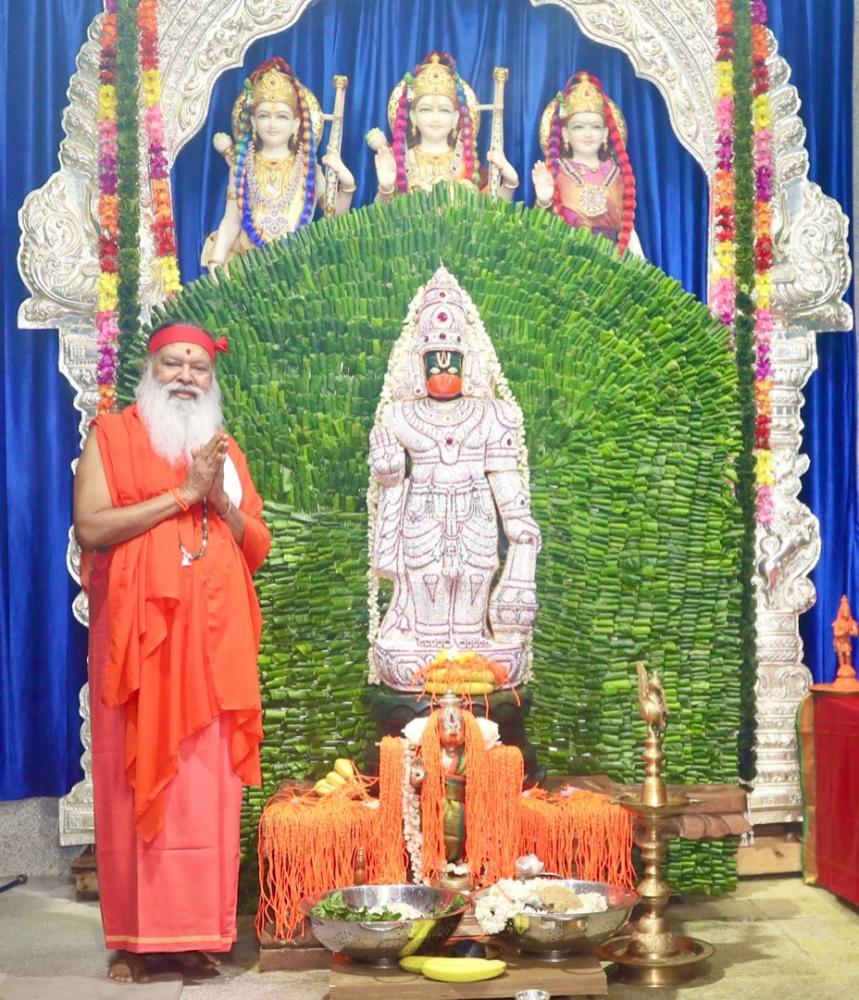 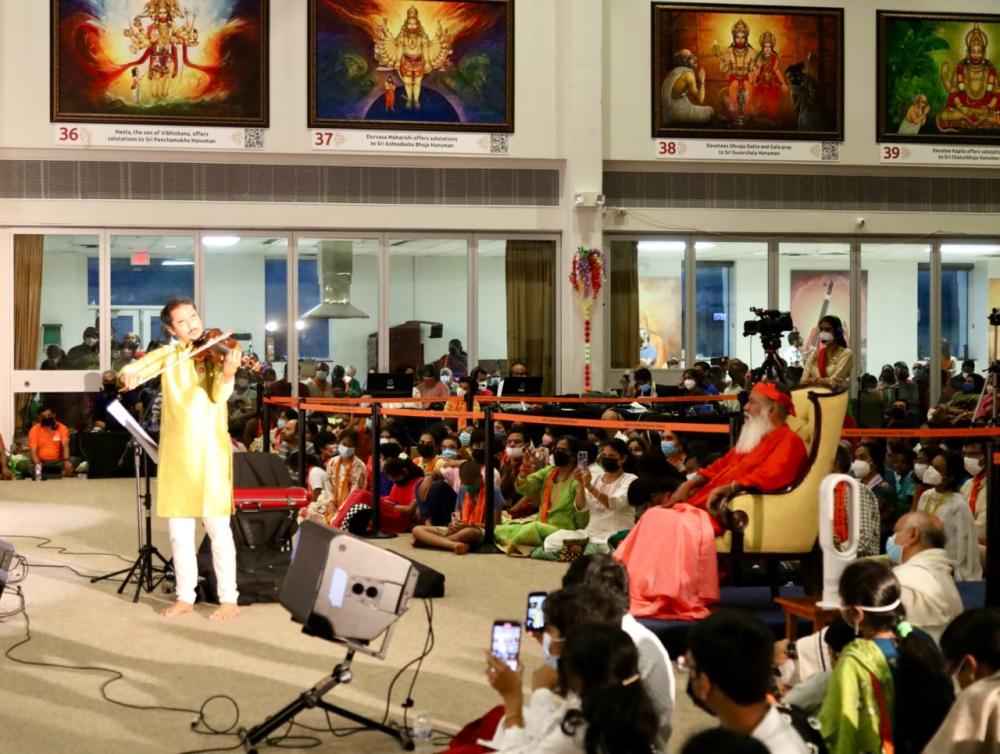