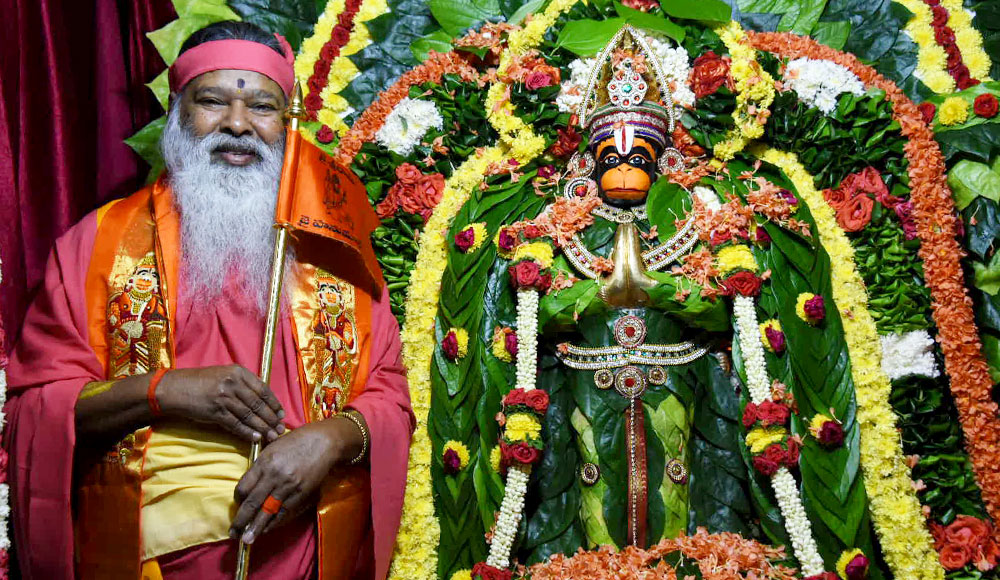 Everybody is urged to participate in this great Yajna by chanting the Hanuman Chalisa individually or collectively with friends and family members.

Sri Swamiji has 9 Guinness World Records. 3 of them are related to Hanuman Chalisa.
1. 31 Jan 2015 ~ For leading the "Most People chanting at a single venue" event at Tenali, Andhra Pradesh, India.

Hanuman Chalisa consists of forty-three verses – two introductory Dohas, forty Chaupais and one Doha in the end. The first introductory Doha begins with the word shrī, which refers to Shiva, who is considered the Guru of Hanuman. The auspicious form, knowledge, virtues, powers and bravery of Hanuman are described in the first ten Chaupais. Chaupais eleven to twenty describe the acts of Hanuman in his service to Ram, with the eleventh to fifteenth Chaupais describing the role of Hanuman in bringing back Lakshman to consciousness. From the twenty-first Chaupai, Sri Tulsidas describes the need of Hanuman's Kripa. At the end, Sri Tulsidas greets Lord Hanuman with subtle devotion and requests him to reside in his heart and in the heart of all devotees. The concluding Doha again requests Hanuman to reside in the heart, along with Ram, Lakshman and Sita.

Rama Mantra gives immense energy and spiritual energy if chanted at any of the below places. His Holiness Sri Swamiji has bestowed a boon that chanting at these places would multiply the japa count by 100 times.