His Holiness The Dalai Lama the Tibetan leader in exile arrived in Sri Avadhoota Datta Peetham on the 22nd afternoon and was received by the Former President of India, Sri. R. Venkatraman and many officials of the city and the Peetham. His Holiness expressed His eagerness to learn about this great institution and the good work done by His Holiness Sri Swamiji. The Dalai Lama spent about 15 minutes in privacy with Sri Swamiji and discussed various current subjects of interest.

On Saturday, Dec 23rd, at 7.30 am His Holiness was received in the Universal prayer hall by Peetham officials. Sri Chakra Archanam (worship of Goddess mother) was witnessed by him during which time Sri R. Venkatraman explained the significance of such important rituals and ceremonies observed by Sri Ganapati Sachchidananda Swamiji, as means for spiritual elevation and Sadhana Special Navagraham, Mrityunjaya and Maha Ganapati Homam was performed in favour of the visiting dignitary who was in meditation while the Pujas went on. Poornahuti was offered to these Homas. Then, special Buddha statues made of sandalwood were blessed by the Dalai Lama. They were in turn given to chief representatives of various Gnana Bodha Sabhas who were present on this occasion of visit. His Holiness the Dalai Lama was taken around the Ashrama by Sri Swamiji personally and he visited some interesting spots such as the Datta Venkateswara temple, Nada Mantapam, Dharma Dhwajam and other sights.

The main event namely the inauguration of the Sapta Swara Devata Temple function began at 3.oo Pm. Thousands of devotees had gathered by now in the esteemed Nada Mantapam. Sri Swamiji accompanied by Sri. P.G.R. Sindhia welcomed His Holiness the Dalai Lama to the Nada Mantapam. Sri. Venkatraman escorted the dignitaries from Sri Mani Padma Kutira. They proceeded straight to Sapta Swara Mantapa. This Mantapa is located on the left corner of mammoth Nada Mantapam. Sri. H.V. Prasad, the executive Trustee briefly explained the significance of this structure. Seven notes of the classical Indian music hold the essence of our spiritual truths. Five elemental forces of the universe are also in them. Sixty four kalas (radiance) are in them. His Holiness the Dalai Lama inaugurated the Mantapa by unveiling the plaque on the spot. For a couple of minutes Saptaswaras were played.

Then, all the dignitaries went to the podium of Nada Mantapa. Dr. A. N. Swarna Prasad compered the function. Sri C.S. Radhakrishna, rendered the welcome speech and introduced His Holiness Dalai Lama, Sri. Swamiji. Sri. R. Venkatraman and Sri. P.G.R. Sindhia. Born in a peasant family the great Tenzin Gyatzo studied Buddhist philosophy and heading the Tibetans cause for self-determination and the respect for human rights and to promulgate a democratic constitution in Tibet were his main aims. He became a leader in exile after Chinese occupation. Being highly respected international figure Dalai Lama strives hard for peace in the world. A man of enormous courage and sacrifice he received the Nobel Prize for peace and other human rights awards. He is a great soul in a humble attire.

His Holiness The Dalai Lama said he happy to visit this beautiful Peetham of Sri Ganapati Sachchidananda Swamiji. He gave his personal greetings to all the people here. He felt that the experience of pleasure and pain was there to overcome them in order to lead a happy life. On the surface of consciousness, we have many religious, ideological, cultural differences, but he felt the oneness here in this Ashrama. People came to this Ashram because of keen interest in spirituality and today man finds something drastically missing. Since we are human beings, because human intelligence, we have to suffer so called worldly experiences. We can remain peaceful in spirit alone in spite of all the facilities that man has created. Man has the capacity and ability to think about future. Why are we unhappy and live in fear. Material, power cannot save you. You need some kind of spirituality. All progress is useless if we neglect spiritual development. From his intuition, we should observe basic values which are called 'Secular ethics'.

Be honest, be truthful and be contented. Then alone harmony will come. Whether people believe or not, Dalai Lama strives to promote religious harmony. Inner spiritual development has to take place now. We have potential to in order to stand up independent and to be in harmony. Swamiji's work is wise work and open minded. See, he has brought various countries together in harmony. Bharat country is known for religious tolerance. Jainism, Buddhism, Parsi, Christianity and all world traditions being together is India's greatness.

Spirit of nonviolence: Humanity has carried a lot of experiments through war in the 19th century and now there is some change here. Nonviolence is working now. Concept of dialogue is working also. These are crucial aspects. Look at Sri Ganapati Sachchidananda Swamiji, very wise, and we share experiences. We sit together and discuss and it is wonderful. Hinduism means Dharma of living. So Buddhism is also. Both religions are like brothers. In Buddhism there is a new Dharma tradition. Chapters of Samadhi, Vipasana are common to Hinduism and Buddhism. He expressed his happiness over Sri Swamiji' contribution for the welfare of humanity. All sorts of knowledge is welcome for betterment of man. Whenever you face disagreement, don’t use violence, never use violence. Have a dialogue and reconciliation. That is the Dharma. Let us me wholehearted persons, use peace and nonviolence as tools.

Sri P. G.R. Sindhia (Former Home Minister of Govt. of Karnataka) said: "Whatever religious path take you to righteousness we called it Dharma. Hindu Dharma and Buddha Dharma were so ancient. The letter "H" replaced letter"S" by Persians, who called us Hindus. The ancient Dharma has different aspects and this religion is sound and stable. Vedas are source and it is Vaidika Dharma. It is not founded by a single person. We have two great Tapasvis (saints) with us. Sarvejanah sukhino bhavantu is the essence of our Dharma. The sheer presence of Sri Ganapati Sachchidananda Swamiji is a Tapasvi, music lover, scholar and a legend of our times. Dalai Lama is a world leader who came all the way to enrich our life".

Sri. R. Venkatraman, chairman of the celebrations committee said: " It is very seldom that two great men meet, talk and discuss. Dalai Lama is regarded as a messenger of peace and the Nobel Prize is given to him for his efforts to spread peace. Dalai in Mongolian means "Ocean" and Lama is a guru. The universe accepts him as a man of universe. Dalai lama is the description of an office. There were 13 Dalai Lamas before and all of them are temporal and spiritual heads. Tibet is as big as the western Europe. Our scriptures say" Dharma is the basis of our lives. Dharmo rakshati rakshitaha. Buddhism says, Dharmam sharanam gachchami and buddham sharnam gachchami. Both have similar meanings what is the equivalent of the word Dharma. The senior Kanchi Shankaracharya asked me once? It is tolerance beauty, religion, karma etc., it has several meanings. This concept of all good qualities is Dharma. Western countries do not have this concept. "He hates none, who sees all beings in himself." This emotional and spiritual brotherhood is universal. All beings are the same. We believe in the universality of the soul, universality of human beings. This is the rights stage for such a concept. Dalai lama is doing a great work. Take Sri Ganapati Sachchidananda Swamiji. On Shivaratri Abhishekam, man belonging to any religion can perform Abhishekam. What Sri Swamiji has given to us is the noblest and the highest in the universe. Have you ever analysed what he really does? It is the recognition of the universality of man and allow him to practice to induce him to practice. That is how institution flourishes.

Progress of the Bhakthi movement is predominant in India. Bhattadri in kerala, Meera in Rajastan, Gurunank, in north, Chaitanya in Bengal, Annamacharya in Andhra, Tyagayya in south, they are all saints of Bhakthi and propagated them. That has kept India together. Music therefore has definitely a higher place in the national life. Sapta Swara organization is unique. It is not easy to build Sapta Swara temple. When we tap the stones, the proper sounds do not emanate so easily. But here, Sri Swamiji makes it so easy. Swamiji made only one experiment and it is successful. Look at the Nada Mantapam. It has less pillars and it is magnificent. Without much pillars as support, you can accommodate 5 thousand people. Swamiji is giving relief and solace to people and it a great work. I am associated with Dalai Lama for many years and he is propagating the ideal of brotherhood of man.

His Holiness Sri Sri Ganapati Sachchidananda Swamiji gave the following message - "Sree Guru Buddhaya namaha - In Kannada I will speak. So many languages are there but their meaning is one. So many different hues of cows, the milk is one. Formless being is the final goal, Surrender to me by relieving yourself of all religious. You have a " Swadharma" and follow it. Today this music hall is a magic hall. Sapta Swara Devata is a miracle. Music is no religion. It is the finest language. A Baby listens to lullaby of mother. Everything listens to Nada. Swamiji visited Tibet and Manasa Sarovar when I was 9 years young. Swamiji visited Lhasa, Paikotsu mountains. We are happy that Dalai Lama is here today with us. Many of the people did not come for Datta Jayanti and they came today. You are all of same taste and you are sugar candy. We have to go the same goal. We have to have a boat and Samsara is a ocean. Do not waste time. Please practice discipline. Self-enquiry is very important. Lingam Aakasha murthim. Sakaara, niraakar is He. Follow your Swadharma. Do not have unwanted imagination. Become a Siddha, Become a Buddha. Bible says the same and the Koran. We have to collect all the values and savour them individually.

Later, all the dignitaries were felicitated on this occasion in an appropriate manner. The sculptor of the Sapta Swara temple Sri. Durugadda Ramacharyulu was felicitated by His Holiness Dalai Lama. Subramanya Sthapathi was also honoured by him. An audio CD"Inner self" was released on this occasion by Dalai Lama and Mr. Silvius Dornier was blessed with a Buddha idol. The music in this album was recorded live in Malibu, USA on 24th July 2000, when Pujya Sri Swamiji was meditatively sitting on the shores of the Pacific ocean and Mother Nature had caused a rare configuration of the 3 “S” – Sagara (Sea), Sangeeta (Music) and Swamiji. The 3 “S” representing the trinity in it’s own way.

There was music concert for meditation and healing by His Holiness after this function. His Holiness rendered Raag- Hamsanandi and Hindolam and other ragas. The whole programme lasted for about two and half hours.

His Holiness the Dalai Lama will leave for Periyapatna on Sunday, 24th Sunday. 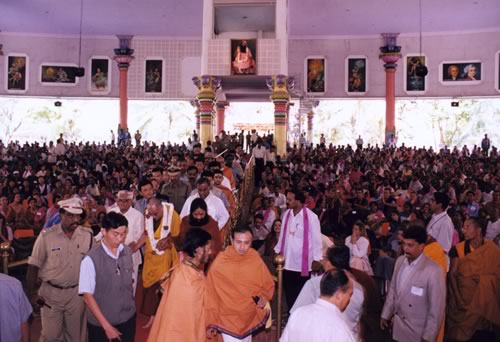 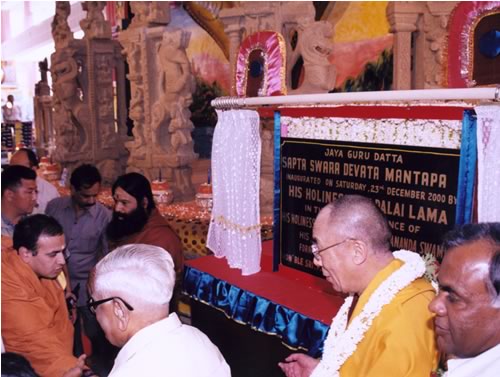 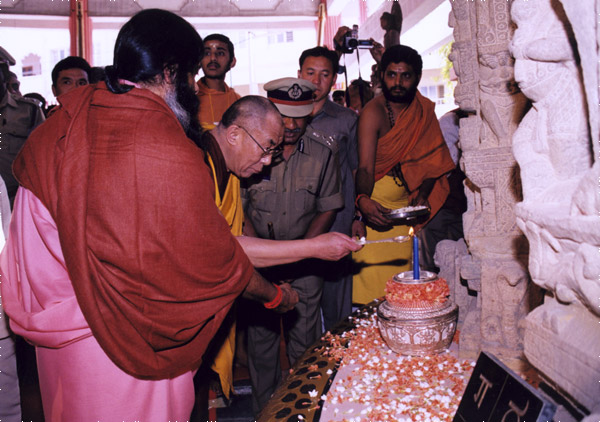 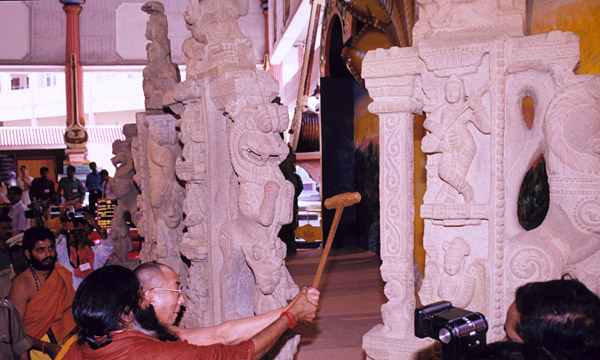 Their Holiness hit one of the Pillar of Sapta Swara Devatas 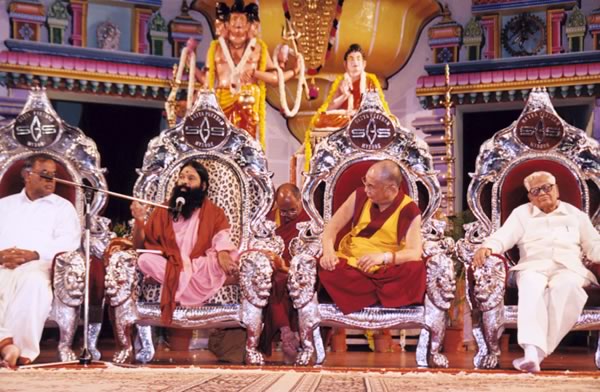 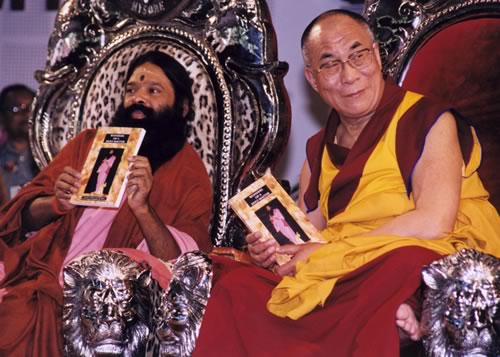 His Holiness The Dalai Lama releases the English book "Wonders of a Holy Master" Vol. II. 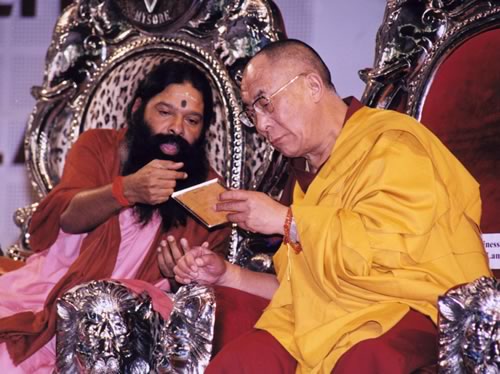 His Holiness The Dalai Lama releases the audio CD"Inner Self" 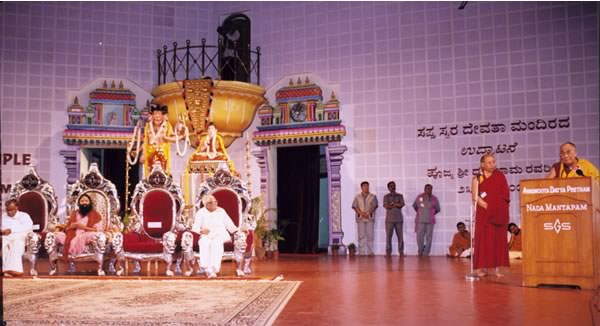 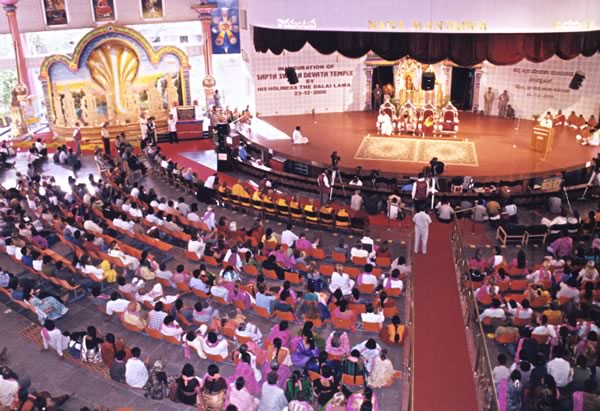 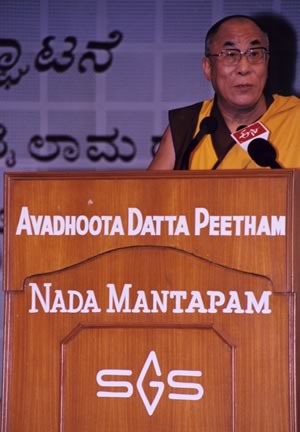 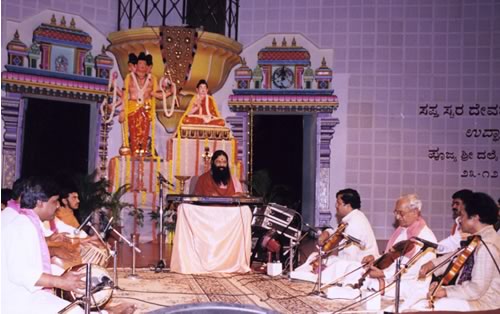