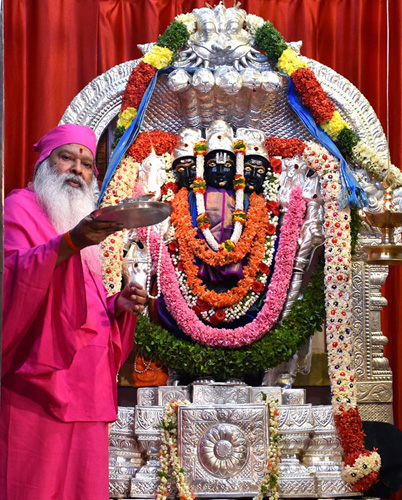 The first Datta temple installed by Sri Swamiji. During the installation in 1978, Sri Swamiji said that Datta Peetham was a hoary tradition started by Dattatreya era and the present temple is just a continuation of that Guru Tattva tradition. This is the primordial & central seat of entire concept of Datta Peetham’s global reach The Datta temple opens daily at 6 AM. Daily Abhishekam, Archana, Ashtottara Seva is done. In the evening, Kakadarati is sung and temple closed.

Kalagni Shamana Dattatreya is the presiding deity, June 4th to June 11th 1978 would remain as one of the most historic and memorable weeks in the growth of Sri Ganapathy Sachchidananda Ashrama for no other reason than that the divine descent of Lord Datta in the form of Sri Kaalagni Shamana Dattatreya took place on 9th June 1978. It was a week long ceremony. Several times in that week Sri Swamiji entered into Samadhi state.

The Dattatreya Temple in Mysore Ashrama was the first Datta temple built by Sri Swamiji. It was built with great fan fare. Before the temple was built, a large stage occupied that place and it was called as Saraswati Peetha and sometimes as Narayana Peetha. After the Datta Temple was built, Ashrama began to be called as Avadhoota Datta Peetham.

The photography of the idol was barred and only one or two pictures remain. However during the removal and re-fixation period, a special ritual called Kala Karshana and Punar Pratishtha is done. During that time the entire power of the idol is invoked in to a Purna Kumbha and the idol is cleansed, re-consecrational ceremonies and rituals performed and lastly the idol will be refixed.

On Rama Navami day which falls on 21st April 2002, the idol will go to its new shrine in the Centre of Prayer hall and the Kumbhabhishekam of the new temple and re-consecration of the Datta idol will happen between 10.30 PM and 12 noon. The head priest in this ritual was Sri. Madduri Yajulu, an erudite Agama scholar and ardent devotee of Sri Swamiji.

In the old Datta temple, a Malachite stone throne was placed and Sri Swamiji sprinkled holy water and sat on it.

All the workers who were involved in the temple construction were given Anna Danam and clothes. Sri Swamiji in a brief message said that everyone should create a new abode for Datta in their head and remove the old doubts and confusion.

In the evening Dr. Amanchi Bala Sudhakara Shastry of Vijayawada town performed hundred thousand Rudraksha Archana to Sri Swamiji. It was held in Nada Mantapa. Kakada Arati was performed to Lord Datta in the evening.

A special forty day Japanushthana ritual will be conducted in the Datta temple after which only the temple will be open for public worship.